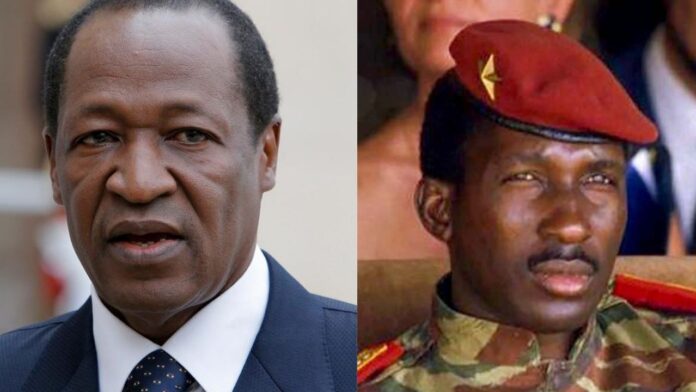 After a long trial of about six months, judges have finally given a verdict for the murder of Thomas Sankara on October 15, 1987, in the ongoing Sankara trial.

Former President Blaise Compaore has been sentenced to life imprisonment by a court in Burkina Faso, over the murder of his predecessor, Reverend Thomas Sankara.

The verdict was given after a long trial period of six months, in the case of Thomas Sankara who was assassinated during a coup led by his friend and comrade-in-arms Compaoré on October 15, 1987.

Military prosecutors present in Ouagadougou, Burkina Faso’s capital requested a 30-year imprisonment sentence for the former president, who was tried alongside 13 others in the ongoing Sankara trial.

Asides from Compaoré, Two other main suspects, Gilbert Diendéré, one of the leaders of the 1987 putsch and leader of the 2015 coup, and Hyacinthe Kafando, leader of Compaoré’s guards at the time were both given life imprisonment sentences.

Recall that Compaoré was removed from office in 2014, and fled to Ivory Coast where he was granted citizenship. Unlike Diendéré who is in custody, Compaoré and Kafando were both tried in absentia.

The case was presided over by the military tribunal, which gave jail terms ranging from 3 to 20 years to the other eight suspects. While three other defendants in the case were all acquitted.

Who is Thomas Sankara?

Thomas Sankara was a pan-African leader who took over power in 1983. He was killed at age 37 alongside 12 other government officials. Upon his death, Compaoré resumed office as his successor, until he was unseated in 2014.

His socialist program of nationalization, mass social welfare, and land redistribution was applauded as transformative; over his four-year rule over one of the world’s poorest countries.

Sankara’s government was credited for a surge in education and healthcare provision; and social reforms toward ending female genital mutilation and polygamy.

His enthusiastic support for independence from colonial rule in Africa, his disavowal of the “France-Afrique” operation of French ties in its former colonies; and his stance against assistance from western financial institutions such as the International Monetary Fund endeared the 37-year-old to many on the continent.

Sankara, 37, was gunned down along with 12 others during the 1987 coup d’état that brought Compaoré to power. The pair had been close friends and had jointly seized power in 1983.

The prosecution said Sankara was lured to his death at a meeting of the ruling National Revolutionary Council. He was shot in the chest at least seven times, according to ballistics experts who testified during the Sankara trial.

The verdict given on Wednesday was huge progress in the case, which was closely monitored by Sankara’s followers within and outside Burkina Faso.

35 years later, Sankara is still popularly known across West Africa for his socialist reforms and speeches. Today, he is known as the “African Che Guevara”, which describes him as a Marxist revolutionary and one of the Cuban Revolution icons.

It was during his tenure as president that the name Burkina Faso was changed from the Upper Volta.