Germany Hands Over First Two of Over 1,100 Benin Bronzes To Nigeria 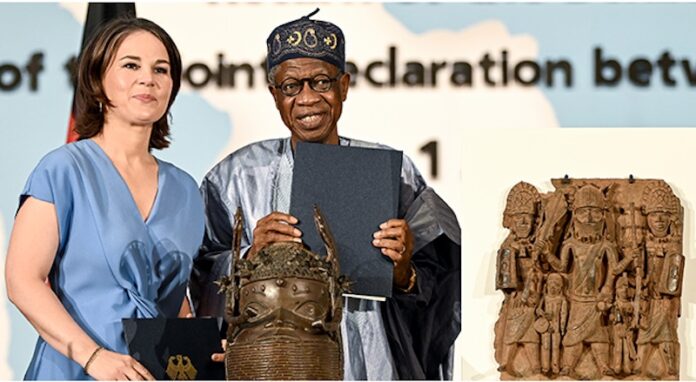 On Friday, German authorities returned the first two of more than 1,100 priceless sculptures, known as the Benin Bronzes, to Nigeria.

The first two bronzes, one representing the head of a king and the other representing a king and his four assistants, will be personally taken by Nigeria’s Foreign Minister Zubairu Dada and Culture Minister Lai Mohammed, who were present at the ceremony.

British soldiers looted some 5,000 of the artifacts -intricate sculptures and plaques dating back to the 13th century onwards – when they invaded the Kingdom of Benin, in what is now southwestern Nigeria, in 1897.

The artifacts have since made it into several museums around Europe and the United States.

“This is a story of European colonialism. We should not forget that Germany played an active role in this chapter of history,” said German Foreign Minister Annalena Baerbock at a Berlin ceremony marking the transfer.

The first two bronzes, one depicting the head of a king, the other showing a king and his four attendants, will be taken back personally by Nigerian Foreign Minister Zubairu Dada and Culture Minister Lai Mohammed

“I am delighted to be part of this auspicious event which, in my opinion, will go down as one of the most important days in the celebration of African cultural heritage,” said Dada.

Germany’s decision to carry out one of the largest ever repatriations of historic artifacts reflects a dawning awareness in Europe of the continuing political relevance of colonial looting and violence in the past.

Chancellor Olaf Scholz has sought to rally emerging countries in opposition to Russia’s invasion of Ukraine, a task complicated by a view, widespread in the Global South, that anger at the invasion is hypocrisy for former imperialists who themselves have episodes of violence and pillage in their past.

According to reports, Germany will help finance a museum to be built in Benin City to house the repatriated bronzes.