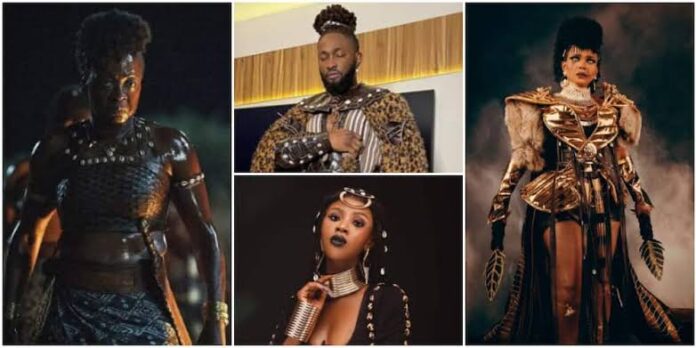 Nigeria’s leading film and television studio, Film One Entertainment has assembled the entertainment industry’s A-list to celebrate the weekend premiere of The Woman King movie.

The Woman King is a 2022 American historical epic movie about the Agojie, the female warrior unit that protected the kingdom of Dahomey in West Africa in the 19th century.

To commemorate the film, Film One Entertainment hosted a celebrity movie night. Guests gathered for the exclusive event at Film House Cinemas Lekki, with the theme of the night tagged “Afro Warriors.”

Iyabo Ojo, Uti Nwachukwu, BBNaija’s Saga, Diana and Khalid, Jide Kene, Hawa Magaji and Daara Oruwayi were some of the guests seen at the exclusive event.

Nollywood actress and reality TV star Iyabo Ojo was in attendance and she stole the show at the premiere of the historical drama.

Known for giving her all when it comes to fashion, Iyabo Ojo stole the show on the red carpet with a daring outfit designed by famed stylist Toyin Lawani, with make-up by Fred Makeover.

She wasn’t the only one who caused a stir at the film’s premiere with her sassy look. Several celebrities went out of their way to impress fans and critics alike. In keeping up with the Afro Warrior theme, guests dressed differently, channeling an historical look deemed fit for ancient warriors.

The Woman King is the remarkable story of Agojie, the female warrior unit that protected the African kingdom of Dahomey in the 18th century with skill and ferocity the world had never seen.

Inspired by real events, The Woman King follows the emotionally epic journey of General Nanisca (Oscar® winner Viola Davis) as she trains the next generation of recruits and prepares them to fight an enemy determined to destroy their way of life.