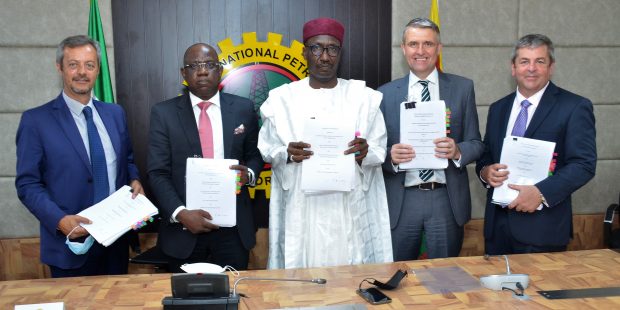 As the war between Russia and Ukraine rages on, the European Union (EU) is turning its attention to Nigeria and other African energy giants with abundant reserves for alternative energy sources.

Russia has been the major supplier of gas to the rest of Europe.

For decades, Russia has been the major supplier of gas to the rest of Europe.

However, as the recent conflict continues in Ukraine, European gas prices have soared and there is the likelihood that Moscow could shut off supplies of gas, widely considered part of President Vladimir Putin’s leverage against the West in his obsession with Ukraine.

For instance, Russia’s latest demand that customers pay for its gas in the Russian rouble or risk gas cut-offs as early as May 2022 is creating an unusual panic for the economic union of 27 member states that are located primarily in Europe.

EU Ambassador to Nigeria, Samuela Isopi, together with France, Italy, Portugal, and Spain’s ambassadors, visited on Monday the headquarters of the NNPC and met with the company’s management.

The visit came as Europe tries to reduce its reliance on Russian gas.

“We are not only major clients for Nigeria, we are also major partners in the oil and gas sector because some of the companies that are working with you are from Europe.

So we share the same interest and the same objectives, “the EU Ambassador in Nigeria, Samuela Isopi, said.

This amounts to 140 billion cubic metres, or 45 percent of the EU’s total gas consumption in a year.

According to a statement by the NNPC spokesperson, the group managing director assured the European delegation that the company would continue to deepen its relationship with EU companies in Nigeria.

He added that the company would work particularly towards increasing gas supply to the global market.

Other experts say new and existing pipelines between key gas fields in the west and north Africa will be fundamental for Europe’s energy future.

Nigeria and Algeria are the biggest African liquified natural gas suppliers to the old continent.

Nigeria authorities say the country has a proven natural gas reserve of 209.5 trillion cubic feet (TCF) as of January 2022.

“The EU has a clear objective to diversify our gas suppliers in the short term while retaining our focus on boosting renewables and phasing out fossil fuels to meet our climate goals,” the spokesperson said.
“At present, (liquefied natural gas) offers the fastest option to diversify our gas supplies.” Gbenga Komolafe, chief executive officer of the Nigerian Upstream Regulatory Commission, said the situation had presented a huge opportunity for Nigeria to occupy the marketplace in terms of gas supply.
“We are currently reviewing the field development plans by operators at the moment to ensure that more gas is produced at Nigerian gas fields,” Komolafe told Arise TV.

He added, “We are also supporting UTM Offshore Limited by encouraging the local investor to get the development of Nigeria’s first Floating Liquefied Natural Gas (FLNG) project completed, which will add an additional 2.2 million tonnes of gas per annum to the market.”

NLNG also has more capacity to put more gas on the market.

“Beyond Nigeria, the EU is also building energy bridges with Egypt, as it is not only a gateway and source of regular energy but also includes new and renewable energy sources. Revenue from oil and gas accounts for about two-thirds of Nigeria’s funding.