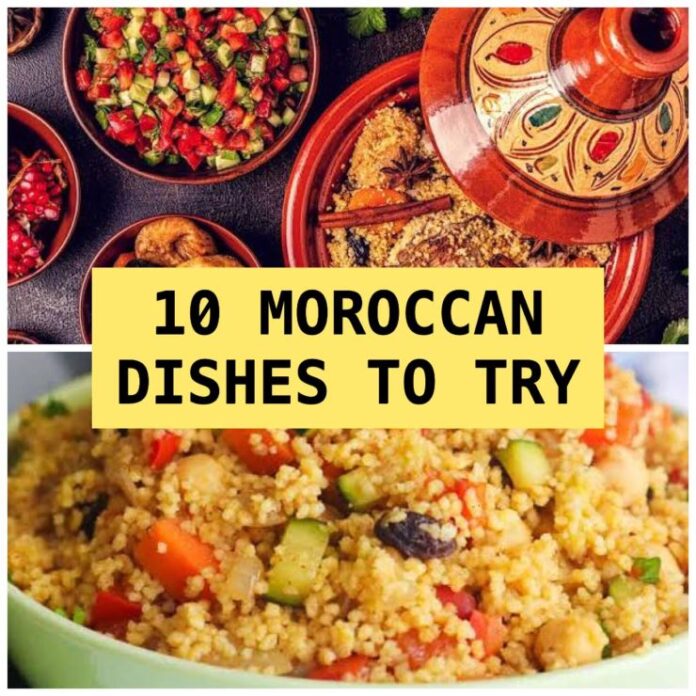 There are many Moroccan dishes to try out whenever you visit the country.

Jewish, Arab, French, and Berber civilizations all have an influence on Moroccan dishes.
Moroccan food is, at least, generally speaking, highly healthful and tasty.

Instead of using processed sugar and deep-frying, the majority of meals use healthful grains, freshly cooked cuisine, spices, and sweet fruit. They utilize couscous instead of rice and lamb, which is leaner than red meat.

Moroccan dishes today is an interesting fusion of spices and textures, influenced over thousands of years by Berber, Jewish, and Arab traditions.

The mobile cooking style, which involves grilled or slow cooking over hot coals and eating bread and dips with your hands, is influenced by the Berber culture.

While Jews brought pickled lemons and olives, Arabs brought meat, sweets, and dates. Feeling adventurous on your visit to Morocco, you can try any of these Moroccan dishes out.

Tagine is literally everyone Moroccan foods and is considered to be the country’s national cuisine.

Tagine is both the name of the food that is prepared in the conical-topped clay cooking vessel.

The components (beef, lamb, poultry, vegetables, etc.) become delicate and lusciously flavoured thanks to the distinctive shape of the tagine and the slow cooking technique. Don’t leave Morocco without at least trying one.

Another typical Moroccan food is couscous. Like tagine, it occurs in a variety of forms and is often eaten with meat or vegetables.

A bowl of buttermilk is typically served with raisins by Berbers. Another method of serving involves piling couscous on top of the meat and pressing the vegetables into the sides.

Morocco’s delectably sweet mint tea is a must-try, as it is essentially the national beverage. There are numerous mint leaves and sugar added to a green tea base. The amount of sugar Moroccans add to their tea is unknown, although it is a significant amount.

Due to Morocco’s proximity to the coast, there is an abundance of fresh seafood.

More than 62 percent of the fish caught in Morocco are sardines, but anchovies, prawns, and mackerel are also frequently found at fish markets and on menus.

Along the seaside, like in Agadir and Essaouira, is where you may find the freshest fish.

Morocco is well recognized for its kebabs and slow-cooked meat, but it is also well known for its vegetable dishes.

Every meal is accompanied by a cooked or fresh salad, and the majority of entrees—including vegetarian tagines, Moroccan soups, and couscous with vegetables—can be prepared without meat.

Lentils, also known as addis, and loubia, which are white kidney beans cooked in a tomato-based sauce, are examples of foods that are strictly vegetarian.

If the sugary, delectable cakes weren’t enough evidence of the Moroccans’ sweet addiction, this will prove a point.

Baba ganoush is a popular side dish frequently served with bread that is made of cooked eggplant combined with tahini, olive oil, garlic, cumin, and black olives.

When served with a mountain of warm pita bread, the taste combination of mashed chickpeas combined with tahini, olive oil, lemon juice, salt, and garlic is amazing.

In contrast to what you may assume, Moroccan salads are typically served with a lot of bread. When served with a main dish like grilled meats, tagines, or couscous, the veggies can be either raw or cooked, served hot or cold, and flavored with herbs and spices.

Zaalouk, a salad made of eggplant, tomato, and garlic, is very well-liked. Morocco is also known for its carrot salad and tk’touka, a dish comprised of peppers, tomatoes, and spices.

You can find dates everywhere in Morocco for incredibly low prices.

Brochettes, another name for the delectable Moroccan kebabs, can be bought practically anywhere.

Kebabs made of beef, lamb, or chicken are grilled over charcoal after being coated with salt and spices.