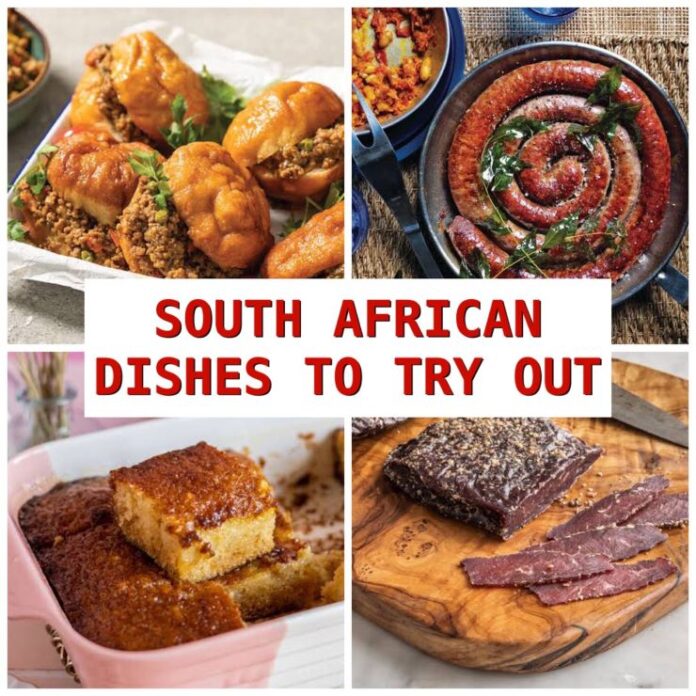 Over the years, South African dishes have been inspired by a variety of cultures, including African, Dutch, French, and Malay.

Here is our list of the top ten South African dishes you must taste on your next visit to the stunning nation.

Vetkoek is among the healthiest and most straightforward South African dishes that one can easily enjoy.

Vetkoek, which in Afrikaans literally translates to “fat cake,” first appears as a fried dough cake. Then, the middle of this doughy handful of delight is split.

Thereafter, the options for fillings are limitless. They are frequently stuffed with cold meats, boerewors, or ground beef in South Africa.

They’ll also be used for braais by many. After that, you can stuff it with one of the many delectable cuts of fresh-grilled meat.

The Dutch oliebol has a big effect on Vetkoek. It is a highly well-liked dish in South Africa’s poorest townships and neighborhoods.

This is largely due to how easy they are to prepare and how full they are. They are sold by truckload at fast food restaurants and street sellers.

Vetkoek is a hearty dish that is a great place to start if you want an authentic, local taste of South Africa.

Sausages are a favorite meal in many cuisines, and they have some wonderful flavors. The cuisine of South Africa is no exception.

Boerewors is made up of nine-tenths meat and one-tenth different spices and flavors, like coriander and nutmeg.
There is consistently a lot of beef in this wonderful sausage. This is then blended with either lamb, pork, or both to produce a flavor that is rich and potent.

On a chilly evening, a warm stew is the only thing that can calm the stomach and the soul. Make sure to taste tomato bredie if you go to South Africa off-season.

This excellent cuisine was first brought to South Africa by Malay immigrants. The recipe originally called for mutton, but nowadays you’re more likely to see it prepared with tender slices of South African lamb.

When you take a sip of the bubbling broth, your tongue will be filled with a variety of wonderful sensations.

In addition to beans, cardamom, and Cape water lilies, this stew also benefits from the addition of cinnamon, ginger, and chile.

This should definitely be on your list of South African dishes to try out.

African families have been feeding their children pap for decades. Many South Africans associate it with their formative years because it is such a renowned South African dish.

Maize is the main component of Pap. The sixteenth century saw the first introduction of this crop to the nation.

Growing maize allowed African farmers to produce significantly higher yields, and as a result, it eventually became one of the most significant foods in the continent.

Warm and comforting, pap is a starch that makes a great foundation for stronger, spicier flavors.

Another delectable meat dish that the Malay people introduced is called sosaties, and it comes from the Cape region of South Africa.

Preparation is the secret to the most decadent sosaties. First, a marinade composed of onions, garlic, tamarind juice, chiles, and curry leaves is prepared.

Lamb from South Africa is cubed and then added to the marinade. To enhance flavor, the marinade is allowed to soak for an entire night.

Sosaties can be grilled or fried when it’s time to cook them. However, braaing them brings out a whole other level of flavor, just like with all South African meat recipes.

Along with the lamb, juicy peppers, onions, and dried apricots are skewered. The magic then takes place on the grill.

Our first stop on the South African dessert tour is the Malva pudding, which has a rich flavor and spongy texture.

The apricot jam that is used when baking the pudding is the main contributor to the sweetness of any Malva pudding.

To a base of creamed flour, soda, milk, butter, eggs, and salt, jam is added. After being placed into a dish, the pudding is cooked until golden.

The pudding is then covered with a delectable, sweet sauce made of milk, sugar, butter, and vanilla while it is still hot.

Served with some thick custard or ice-cold ice cream, it is a wonderful sweet delicacy that South Africans enjoy worldwide.

The Melktart is a South African delicacy with a melt-worthy pastry crust and a moreish custard inside that unites friends and families.

The Dutch mattentaart is where the dessert originated. The Dutch introduced this dessert that resembles cheesecake to the nation in the seventeenth century.

The main distinction between Melktart and Portuguese custard tarts is the higher milk to egg ratio.

In comparison to, say, a classic Portuguese custard tart, this results in a delectable custard interior.

A slice of melktart, which combines tantalizing flavors like cinnamon and almond, is the ideal dessert to end a meal of braaied meat.

The spicy flavor of biltong will undoubtedly appeal to fans of beef jerky. Are you a meat lover looking for South African dishes to try out?

In the seventeenth century, vinegar and potassium nitrate were used to preserve meat.

These methods are still employed today. The biltong formula has changed over time, though.

There are numerous meats available for biltong. Sliced beef is usual, but if you’re feeling more daring, you may try biltong made from native South African meats such tender kudu and ostrich.

The national food of South Africa is the beloved bobotie. It is a dish that is flavorful and filling.

Surprisingly, the dish dates back to the Roman era. Blending and seasoning a mixture of soft meats and crunchy nuts, ancient Roman chefs would then cover it with a layer of milk and egg.

The dish for today’s cuisine was introduced to South Africa by the Dutch and is enticing thanks to spices like curry powder.

Additionally, the top is garnished with dried fruit. This substantial South African dish receives a last fruity boost from raisins and apricots.

In recent decades, vegetarian bobotie has been prepared and has grown in favor. South Africans particularly enjoy lentil bobotie.

The word “Gatsby” brings up images for Capetonians that are very dissimilar to the world-famous book by F. Scott Fitzgerald.

A “Gatsby” is a fabled and enormous sub-style sandwich that Capetonians who call the Mother City home simply cannot get enough of.

In the city, the sandwich was first created in 1976. A freshly acquired shop’s owner was looking for a quick and simple solution to feed his construction crew.

So he used his creativity. He quickly prepared some French fries, polony, and pickles, placed it into a big loaf of bread, and then sliced it into four pieces.

One of the employees had just seen the movie “The Great Gatsby” at a nearby theater. After his first mouthful, he was in love at once.