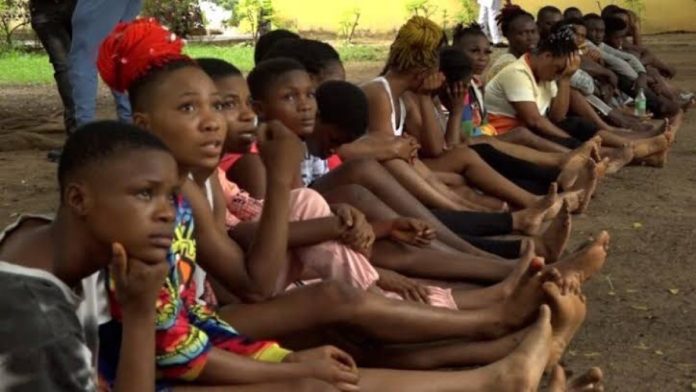 Eighteen girls between the ages of 10 and 15 have been arrested and detained by the Police in Western Equatoria for allegedly raping a Yambio man and several others.

According to sources, these young girls go by the code name, ‘Nanziri Kumbakuadee,’ a name derived from the Zende dialect which means “How sweet are married men?’’

The young girls have been said to have a habit of targeting married men, often hunting them down for sex in and around the capital, Yambio.

After numerous escapades, the young and underage girls were arrested by the local police force after allegedly raping a young man in Messia Residential Area, west of Yambio town, on Sunday night.

The hours were long, and so was the list of young women who forced themselves on the young man. As a result, he was immediately rushed to the hospital after being left unconscious by the young ladies of the night.

Although he escaped after regaining consciousness, the Yambio County Police Inspector Maj. Gen. Hessen Girsi denied that the incident was rape. He claimed that the information as stated by the local narrative is “entirely wrong.”

“What happened is that we got a report that there is a group of girls in Messia who are searching for men to have sex with. They are mostly intoxicated. So, when we got the information, we started our work, and we got them,” Girsi noted.

The security personnel noted that the total number of young ladies who supposedly belong to this group is about 50. However, only 18 have just been arrested with the promise of rehabilitation for them before they are handed over to their parents.

“We did not open a case against them because we wanted to solve it in another way, socially.”  Girsi started. He explained that if the case had been open, it would not be a plausible solution.

So, instead, efforts were made immediately after they were caught, to invite their parents as well as the ministry for gender, child, and social welfare to discuss how the young ladies could be helped.