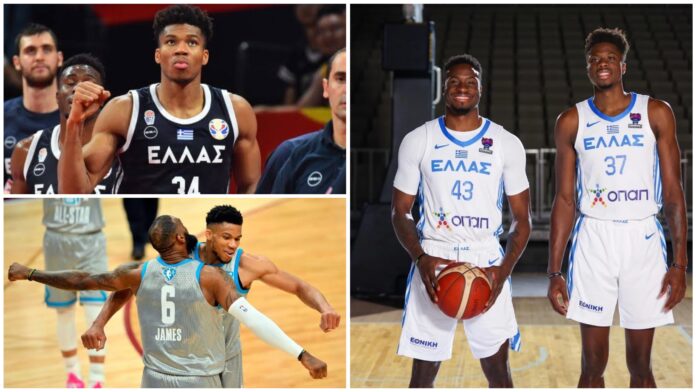 Giannis Antetokounmpo and his brothers will represent the Greece national team, despite their love and pride for Nigeria.

The Greek-Nigerian professional basketball player, Giannis Antetokoumpo, will participate in the 41st edition of the EuroBasket championship.

Based on his recent announcement, the 27-year-old will play for the Greece national basketball team at EuroBasket 2022.

Giannis, a two-time NBA Most Valuable Player Award winner with the Milwaukee Bucks, had the opportunity to represent Nigeria and Greece.

Although, many European players from Spain, Germany, and France played in the NBA, but none from Greece and of course, nobody like Antetokounmpo. Perhaps informing his decision to pick Greece.

Born and raised in Athens to Nigerian immigrant parents, the 18-year-old athlete arrived in the NBA in 2013 as the 15th pick. Having already played in the professional league for 2 years, he was already at a stage of marked development of his career.

In the space of 8 years, this 2 meter skinny guy is one of the dominant players in the league, arguably the most dominant at the moment. He has received the most awards for any NBA player and is already one of the top 75 NBA players of all time.

However, his recent decision remains something that might reflect his legacy when all is said and done.

The two-time MVP grew up immersed in Greek culture, learned the language, went to school and finally started playing basketball at age 7.

However, the athlete learned and lived the Nigerian way when he was at home with his family. A strong supporter of his homeland, Giannis never fails to mention his Nigerian roots.

“I grew up in a Nigerian home,” Antetokounmpo said. “Of course, I was born in Greece and studied in Greece. But at the end of the day, when I go home, there is no Greek culture. It is genuine Nigerian culture.” Giannis painted a picture of his childhood, explaining his experiences and how it had to do with learning discipline, respecting elders and having morals.

“There are a lot of people I see, and I tell them I’m African.” He claimed that unlike the popular notion that he is just Greek, there is more to him as he is, in fact, African.

Still, worth $93 million, the Antetokounmpo brothers will represent the Greece national basketball team. Although the Nigerian national team is not very happy about it.