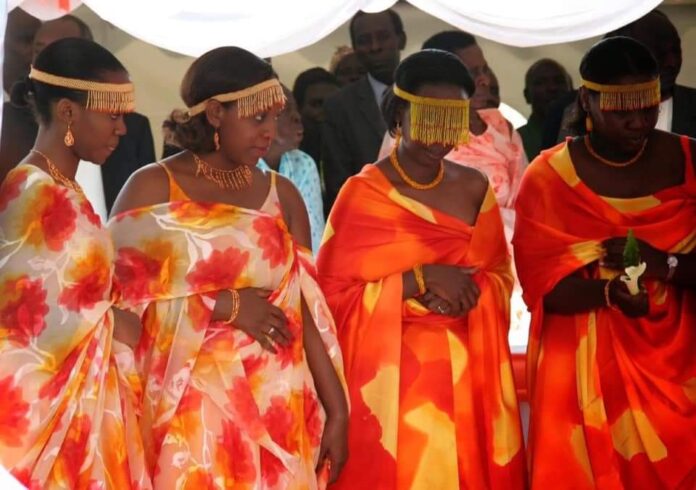 Can you imagine sharing your husband-to-be with a family member? Well, this is what happens in the Banyankole tribe of Uganda.  The Banyankole represents one of the four traditional kingdoms of Uganda. It’s located in the Southwestern Uganda and it’s well-known for its long horned cattle.

Banyankole is made up of two tribes, the Bahima and the Bairu. The Bahima’s are majorly cattle herders while the Bairu are farmers.

Like with every other African tribe, aunties in this tribe played a major role in preparing their nieces for the journey ahead. In the Banyankole community the bride’s aunt was tasked with two major roles. One to check and confirm the groom’s potency and two to check if her niece had maintained her virginity till marriage.

Virginity was highly valued among this community. As soon as they hit age 8 girls would be segregated in a room and they would be taught about the importance of maintaining their virginity till marriage. At the same time the girls would be fed with milk, millet porridge and beef in order to grow fat. The Banyankole tribe equates fatness to beauty.

In this tribe the son’s father was tasked with finding a wife for his son and also paying the dowry. Their dowry included goats, cows and some pots of beer.  After the son’s father chooses a girl from a certain family the aunt from the father’s side in that family begins the investigations.

She has to ensure her niece is still a virgin and confirm if the boy who is proposing to take their daughter is potent. To do this, the aunt does sex with the groom to test how vigil he is and his potency. It is only after this act that the wedding can go on I.e. after confirming that the parties meet the laid down requirements.

Share
Facebook
Twitter
Pinterest
WhatsApp
Previous article
Omar Sy to star in a film about the Senegalese Soldiers forced to fight for France in World War I
Next article
The Story of the Powerful Luo Magician, Gor Mahia