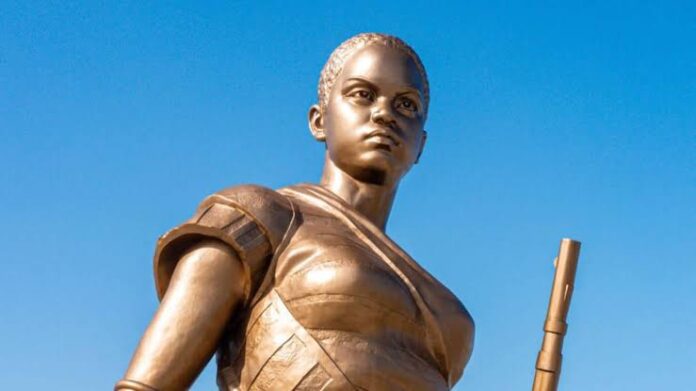 The Republic of Benin has officially inaugurated a 30 m metal statue dedicated to the famous female warrior of the ancient Benin kingdom, Queen Tassi Hangbé.

Currently, the country has now made the statue in dedication of the famous warrior and also in reshaping its identity to fit the historical representation of the Amazon queen and her warriors.

An imposing display can be seen in the sky behind the Marina Palace, not far from the Congress Palace and the Port of Cotonou.

The monument erected on the “Esplanade des Amazones” entitled “Amazone” intends to establish a strong symbol in honor of the women warriors of Dahomey.

Danxome, the first female army created by Queen Tassi Hangbe, the only woman to rule the kingdom from 1708 to 1711. The work is part of the general urban and landscape development program along Marina Boulevard.

Danxome, now Benin, not to mention the Amazons. These courageous women who risked their lives to defend their homeland remain etched in the memory of Beninese people.

Warriors in every way, the Amazons of
Danxome are revered for their bravery against enemy soldiers in pre-colonial times.

Created by her Royal Highness Tassi Hangbe, this elite female military was then rehabilitated, upgraded and formed by His Majesty King Ghezo in 1820 to become a special elite corps responsible for the defense of the sovereign and her kingdom. His motto was “win or die”.

Through this monument, Benin pays them a well-deserved tribute and immortalizes an important part of the country’s history.

The global tourism sector has changed in recent years and there is an urgent need for Benin to keep up with the various reforms in this sector.

Like the Eiffel Tower in France or the Renaissance monument in Senegal, without forgetting the Great Wall of China in China or the Statue of Liberty in the United States, Benin has decided to equip itself with a remarkable monument for its tourist development. At that time, an Amazon was chosen as Benin’s visual identity.

So, through this memorial, the administration of President Patrice Talon not only pays tribute to female bravery, but puts women at the center of development.

Furthermore, since the Council of Ministers of July 17, 2019, the government has announced the contract with Chinese artist Li Xiangqun for the realization of the Amazon statue.

According to the minutes of the Council of Ministers, “The Amazon Monument aims to establish a strong symbol of our country’s identity and consists of erecting an emblematic work in honor of the Amazons of Dahomey. It is a metal statue with a bronze shell and a total height of 30 m”.