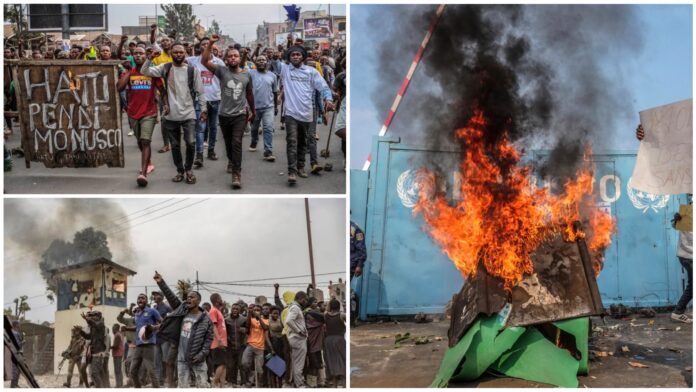 Dozens of youths have taken to the streets in the city of Goma, in eastern DRC, to protest the alleged ineffectiveness of the Foriegn troops serving under the UN MONUSCO peace mission in Goma.

Protesters smashed windows and looted valuables, while helicopters pulled UN personnel out of the compound and security forces fired tear gas to push them back.

The unrest in Goma continued on Tuesday with the fatal shooting of a man near the logistics base, an AFP correspondent said.

In a tweet, government spokesman Muyaya added that security forces fired “warning shots” at protesters in Goma to prevent attacks on UN officials.

According to witnesses, anti-UN protesters also took to the streets in the North Kivu cities of Beni and Butembo.

Soldiers were deployed on the road leading to the MONUSCO base in Beni, about 350 kilometers north of Goma, as protesters burned tires.

Security forces also dispersed protesters who had gathered outside a MONUSCO base in Butembo, another provincial center, local sources said.

The UN mission in the Democratic Republic of Congo, known as MONUSCO, is one of the largest peacekeeping operations in the world.

But it has been regularly criticized in the country’s troubled east for its alleged inability to stem decades of bloodshed.

More than 120 armed groups roam the volatile region, where massacres of civilians are common, and the conflict has displaced millions.

Ahead of Monday’s protest, Goma’s youth arm of the ruling UDPS party issued a statement demanding that MONUSCO “withdraw from Congolese soil without conditions because it has already demonstrated its inability to offer us protection”.