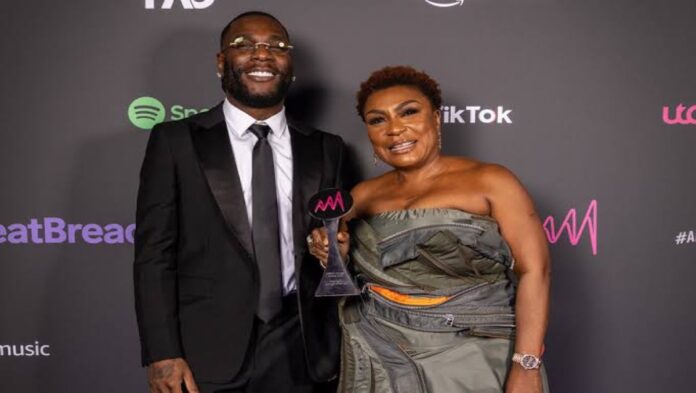 Burna Boy and his mother, Bose Ogulu shared a special moment when he was delighted to present the Manager of the Year award.

Ogulu is not only the mother of the Afrobeats artist but also his manager. She has held the position for several years, overseeing Burna Boy’s career from a rising artist into an international sensation and Grammy-winning artist.

On Thursday, Bose Ogulu was honored with the prestigious Manager of the Year Award at the 2022 Artist and Manager Awards (AMA) in London.

The event took place at London’s Bloomsbury Big Top on Thursday to celebrate the personalities who work with and support some of the world’s greatest talent.

In her comments, Ogulu noted that she is rarely the center of attention.

“This is for all of us who endure the perversions and transgressions of the creators we love and who raise our hands day and night to shine the spotlight on them. They deserve their flowers,” she told her fellow managers.

Ogulu also thanked her son and creative director Will, as well as her team members for making the artist’s career a success.

“We come from a very far away place, but we haven’t gotten anywhere yet,” said Ogulu, summing up his son’s rapid rise to fame over the past two years.

Not only did Ogulu support his son’s career by helping to manage it with the release of his African Giant album in 2019, but he also co-produced the Grammy Award winning Twice As Tall released in 2020.