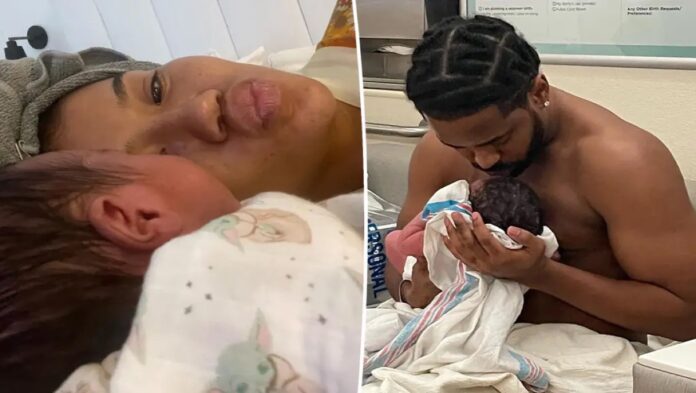 Singer, Jhené Aiko has given birth to her second child, her first with rapper Big Sean.

“11/8/22✨💙 Noah Hasani💙,” she captioned an Instagram post on Friday, which showed a family of three in a hospital delivery room.

“After 24 hours of Labor, A Lunar Eclipse, with rain from the beginning of labor til he was born, he’s here safe and sound,” Big Sean wrote in a Nov. 18 post. “Happy, Healthy and everything we could ever ask for and more. Any and everything for you Son. Noah 11/8/22.”

Aiko, 34, opened up about her pregnancy to her Instagram followers in July, posting a nude photo of her pregnancy.

The then pregnant star rocked her baby in a social media upload where her skin was visibly glowing against a galactic backdrop.

Sean, also 34, thanked his partner in the comments section, adding: “I can’t wait.”

The sweet exchange came nearly two weeks after Page Six confirmed the couple had a baby on the way.

“The couple are thrilled and looking forward to the next chapter,” Aiko’s rep said at the time.

The “Bed Peace” singer became a mother first in 2008 and shared her first daughter Namiko, now 13, with R&B singer O’Ryan.

Aiko was married to producer Oladipo “Dot da Genius” Omishore for two years before she began dating Sean in 2016.

In 2018, the on-again off-again couple sparked rumors that they called it quits when Aiko covered up several of her tattoos, including the rapper’s face.

She confirmed the split via Instagram the following year, writing that she still has “so much love for him”.

The Twenty88 crew looked cozy while attending a party in late 2019, after which they made their reconciliation official on Instagram in 2020.