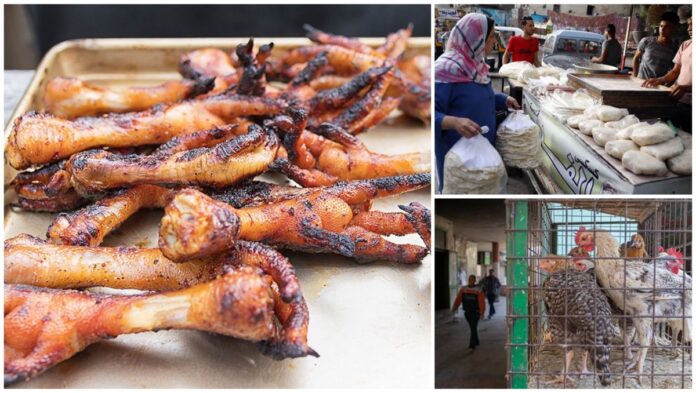 Egypt is currently facing an unprecedented economic crisis that has taken an unfortunate toll on the daily lives of its citizens as the country’s ‘National Nutrition Foundation’ urges people to switch to eating chicken feet.

Recently, rising food costs have led the country’s National Nutrition Foundation to urge people to switch to chicken feet as an alternate source of nutrition as it is the cheapest type of meat.

This move has angered many Egyptians in government, who consider it unacceptable to ask citizens to resort to foods that are symbols of extreme poverty in the country.

The North African country is said to be facing a record currency crisis and its worst inflation in five years, leaving many Egyptians unable to afford chicken, a staple food.

The Egyptian economy has taken a huge hit over the past two years as the impact of the COVID-19 pandemic and the war in Ukraine have depleted foreign exchange reserves and fuel prices have soared, leading to higher inflation.

According to Reuters, the pandemic prompted investors to withdraw $20 billion from Egypt in 2020, and the economic fallout from the war in Ukraine prompted a similar amount to leave the country last year.

Before the coronavirus, Egypt was going through a series of financial crises that forced its government to seek bailouts from creditors such as the International Monetary Fund and Gulf Arab allies.

In the latest bailout, agreed in December, the International Monetary Fund lent Egypt $3 billion, which is expected to generate another $14 billion from Egypt’s international and regional partners, including the oil-rich countries of the Gulf.

The loan was conditional on Egypt implementing a series of structural reforms and introducing a floating exchange rate – which would allow the currency’s value to be determined by the market rather than the central bank.

According to the International Monetary Fund, factors that contributed to the collapse of the Egyptian economy include the huge military role that analysts say weakens the private sector, as well as the allocation of large sums of money to megaprojects such as the tallest tower high.