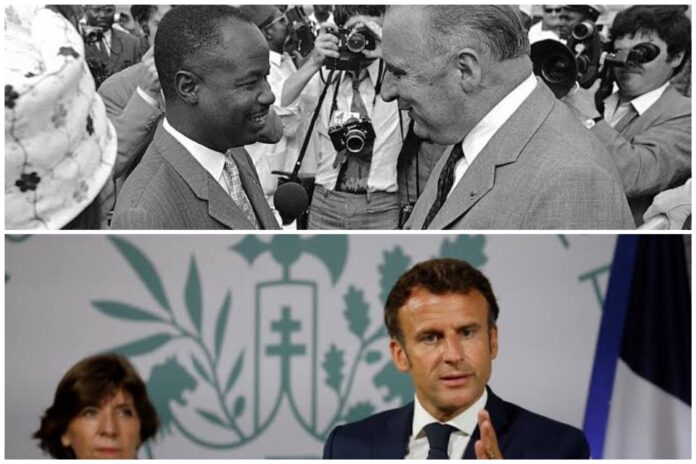 President Emmanuel Macron has, on Tuesday, July 26, said that the records pertaining to French colonial authority in Cameroon would be opened “in full” and he urged historians to shed light on the “sad moment” of the era.

Speaking in Yaoundé, the capital of Cameroon, Mr. Macron said he wanted historians from both nations to collaborate when looking into the past.

Mr. Macron expressed his hope that historians from both nations would collaborate to look into “painful moments” at a press conference with Cameroonian President Paul Biya. He also stated that France’s archives on colonial rule in Cameroon would be opened “in full.”

As he began a three-nation journey with the goal of improving France’s relations with the continent, the president also stated that his nation will support Africa’s need for security.

As a result of a jihadist campaign in the Sahel, which is currently scaring neighboring countries to the south, Mr. Macron pledged that France “would not cede the security of the African continent.”

He addressed a group of French expats, saying, “France is steadfastly committed to the security of the continent, acting in support and at the request of our African partners.”

French military estimate that the Barkhane anti-jihadist force will have about 2,500 soldiers in the Sahel after a withdrawal from Mali that is anticipated to be finished in the upcoming weeks, or little under half of the deployment at its peak.

According to them, the army will also change its tactical approach and focus more on supporting local forces than taking the initiative.

The mission’s new focus, according to Mr. Macron, would extend “beyond the Sahel, to the Gulf of Guinea, and second-layer nations that now have to face terrorist groups that are expanding and shaking up the entire area,”

He also promised France will back nations battling terrorists in the Lake Chad region, where an earlier uprising headed by Boko Haram in Nigeria is still raging.

Among them is Cameroon, whose Far North, which extends into the Lake Chad basin, has been the target of numerous assaults.

On a three-day trip that will also take him to Benin and Guinea-Bissau, Mr. Macron arrived late on Monday. He had a meeting on Tuesday with Mr. Biya, the stern, 89-year-old president of Cameroon who has been in office since 1982.

Since being re-elected in April, Mr. Macron has not visited the continent until his current swing across central and western Africa.

In an area, it still deems to be within its sphere of influence, France has watched the rise of Russia, China, and others with anxiety.

According to a presidential spokesperson, it will demonstrate that his (Macron) leadership considers the African continent to be a “political priority.”