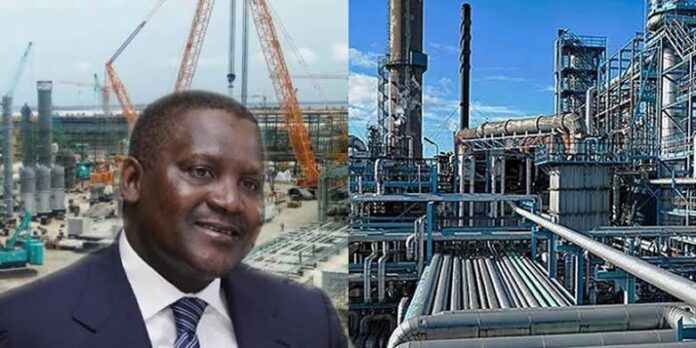 Dangote’s 650,000 barrels per day (bpd) oil refinery, which is being built in Nigeria, is scheduled to start production in the fourth quarter of 2022.

With the completion in sight, Dangote has revealed that the project will prove quite useful in boosting Nigeria’s export earnings.

“75% of the hydraulic tests… as well as 70% of the electrical wiring installation were completed in preparation for the completion of the refinery in the fourth quarter of this year,” Edwin said during a site visit with Nigeria’s Information Minister Lai Mohammed. .

The refinery, which is being built in Lagos for $19 billion, will have a storage capacity of 4.74 billion liters, Edwin said. He added that 75% of products in Nigeria are transported by sea.

Africa’s richest man, Aliko Dangote, said in January that he expects his oil refinery project to start production at the end of the third quarter and reach full capacity in early 2023.

The project was delayed for several years and the cost increased to $19 billion from Dangote’s earlier estimates of $12-14 billion.

Dangote, which has built its fortune in the cement industry, first announced its intention to build a refinery in 2013, with the project expected to be completed in 2016.
The billionaire then moved the location to Lekki in Lagos, increased the size and said production will begin in early 2020.

Despite being Africa’s largest oil producer and exporter, Nigeria is almost entirely dependent on imported fuel, having allowed its considerable refining capacity of 445,000 bpd to decline over several decades.

Last month, Dangote inaugurated a US$ 2.5 billion fertilizer plant located at its refinery and petrochemical complex, which already exports urea to the United States, India, Brazil, Mexico and Argentina.

Mohammed said he saw a ship being loaded with urea for export to Argentina during the site visit.