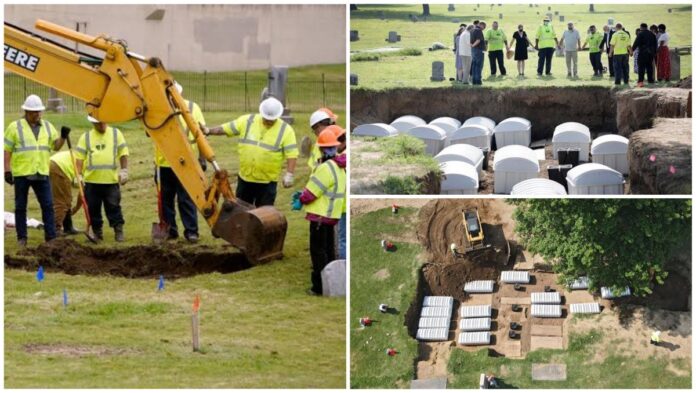 A team of scientists began on Wednesday, the re-exhuming of human remains to identify the people killed in the 1921 Tulsa Race Massacre, one of the best-known examples of white mob violence against black Americans in US history.

The team plans to dig up some of the 19 remains originally exhumed from Oaklawn Cemetery in Tulsa a year ago to test more DNA.

None of the recovered remains have been identified or confirmed as victims of the massacre, which led to the destruction of more than 1,000 homes, looted hundreds and destroyed a thriving business district known as Black Wall Street through racist violence. Historians estimate the death toll at between 75 and 300, wiping out the wealth of generations.

The victims were never compensated, but a pending lawsuit is seeking compensation for the three known survivors of the violence. They are already over 100 years old.

Danny Hellwig, director of laboratory development at Intermountain Forensics, a nonprofit foundation based in Salt Lake City, said on Wednesday that DNA previously extracted from the remains had been degraded during the more than 100 years they were buried, resulting in in more tests needed.

Hellwig said work to develop a genealogical profile for the two remains with enough viable DNA could likely begin in about a week and be completed in weeks, but efforts to identify the remains could take years.

The final search of the cemetery is scheduled to end on November 18.

Following the exhumations, forensic anthropologist Phoebe Stubblefield said another search will begin for 18 bullet-wounded bodies whose burials in simple coffins were previously documented, but with no information on where the coffins were located in the cemetery.

The remains will be buried, at least temporarily, in Oaklawn, where the previous burial was closed to the public, prompting protests from about two dozen people who said they were descendants of victims of the massacre and were allowed to attend.