Ganga Zumba: The African Prince Who Escaped Slavery to Rule as a King in Brazil 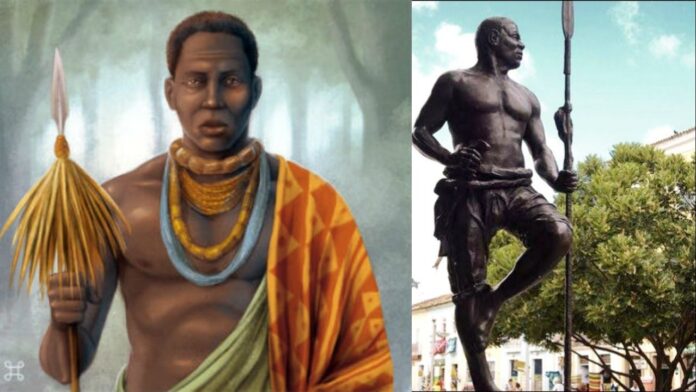 Ganga Zumba is remembered as the Black hero, Freedom fighter, and warrior, who is significant to the history and modern-day struggle of the Brazilian Black Movement.

He led an alliance of “independent settlements”– Quilombo dos Palmares; which is located between the states of Alagoas and Pernambuco. In northeastern Brazil, Quilombo dos Palmares was founded by early Brazilian Africans in the late 16th century as resistance to European colonizers and enslavers.

It is one of the first places, in the Americas, where enslaved Black people found freedom. For almost a hundred years, Black people in Quilombo fought against their enslavers; particularly the Portuguese who attempted to colonize Brazil.

Ganga Zumba was the first leader of the massive runaway slave settlement of Quilombo dos Palmares during the late 17th Century, which is the present-day state of Alagoas, Brazil.

Nganga Nzumbi is regarded in some documents as Ganga Zumba being his proper name, making the name widely used today.

Some documents translate his name as “Great Lord In Kikongo. Nganga Nzumbi is known as the priest responsible for defending his community spiritually; which was known as a kilombo or military settlement made up of multiple groups.

How Ganga Zumba was captured

Ganga was believed to be a Kongo Royal as the son of Princess Aqualtune; the daughter of a Kongo King.  The princess led a battalion at the Battle of Mbwila against the Portuguese but unfortunately lost the battle.

The Portuguese killed at least 5,000 men and captured the king, his family, court officials, titleholders, and a very high number of nobles who were put on ships and sold as slaves in the Americas.

Ganga Zumba was among the captives with his mother, sister, and mother. They were sent to Santa Rita Plantation in northeast Brazil.

Ganga Escapes from the Hands of his Oppressors’

Ganga Zumba eventually escaped to Palmares with his family. The village was known as a mocambo or a refuge of runaway slaves who were forcibly brought to Brazil.

Ganga was then elected by the leaders as king over the alliance.  He ruled over the largest village, Cerro dos Macacos, which ultimately became the governance place.

Historians noted that in the 1670s, the royal had a palace, three wives, armed guards, and devoted subjects at his royal compound called Macaco.

The compound consisted of 1,500 houses for his family, guards, and officials. All of them were considered royalty.

The Fall of Quilombo dos Palmares

In 1678, Ganga reportedly accepted a peace treaty offered by the Portuguese Governor of Pernambuco, which required that Palmarinos will relocate to somewhere different.

The treaty was challenged by Zumbi, one of Ganga’s nephews, who led a revolt against him. Historians reveal that Ganga was poisoned for entering into an agreement with the Portuguese and many of his followers moved to the Cucaú Valley.

Unfortunately, they were captured and taken back to slavery.

A movie was made about this great warrior in the year 1963. The Brazilian film titled “Ganga Zumba” was released as a story of Ganga’s life.

However, due to a military coup in Brazil in 1964, the movie was released a decade later. At that time, films about revolutions, even those taking place in the 17th century, were considered politically dangerous.