History on The Rise and Fall of Ghana Empire 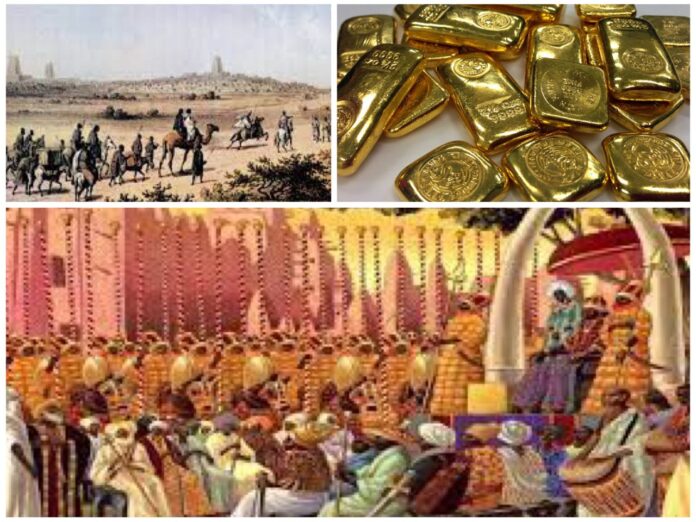 The Ghana Empire flourished and was so wealthy between the 9th and 11th centuries C.E. that its dogs wore gold collars and its horses slept on magnificent carpets. It’s no surprise that Europeans regarded Ghana’s monarchs as the wealthiest men in the world.

The Ghana Empire was located in the western Sudan savannah region (today southern Mauritania and Mali), sandwiched between the Sahara Desert to the north and the rainforests to the south. It was not geographically connected to the existing country of Ghana.

These rivers, together with the Sahara Desert produced a natural triangle of flat grasslands that the Ghana Empire occupied.

The Soninke-dominated region is known in indigenous oral traditions as Wagadu or Wangara, the Muslim geographers’ word for Middle Niger.

There is no agreement on when the empire began, but its evolution is tied to the changes in trade that occurred over the centuries following the introduction of camels to the western Sahara.

The regular and accelerated trans-Saharan traffic in gold, salt, and ivory enabled the growth of larger urban centers and supported territorial expansion to obtain control over various trades.

The availability of iron, copper, gold, and ivory, as well as convenient access to the Niger and Senegal rivers and their tributaries also promoted trade in the Ghana Empire.

Also read: The Golden Stool of Asante People in Ghana

The Ghana monarchs, who lived in the capital of Koumbi Saleh, built up enormous wealth by stockpiling gold nuggets that only they were allowed to possess. As a result, Ghana’s fame spread to North Africa and Europe, where it was described as a fantastic gold land.

The Ghana royal family was first recorded in written documents in 830, hence the 9th century is frequently considered the beginning of the empire.

In historical Arabic sources, the word “Ghana” might refer to a regal title, the name of a major city, or a country.

Al-Khuwarizmi, who died in 846, made the first mention of Ghana as a settlement. Research on the location of Koumbi Saleh (or Kumbi Saleh), a ruined medieval town in southeast Mauritania that may have been the capital of the Ghana Empire, shows older beginnings.

The Niger River flooded areas of this dry grassland and savannah on a regular basis, providing fertile territory for agriculture.

Cereals such as red-skinned African rice and millet, as well as pulses, tuber and root crops, oil and fiber plants, and fruits, were cultivated successfully. Other key food sources included fishing and cattle and goat herding.

There have also been numerous finds of exquisite pottery, some of which were trafficked around the region.

Similarly, gold was most likely mined locally and traded along the region’s numerous waterways, but actual evidence from this early time is missing.

The Ghana Empire’s capital was most likely Koumbi Saleh (in the absence of any other viable candidates). It is located 322 kilometers (200 miles) north of current Bamako, Mali, and is also known simply as Ghana.

Following recent discoveries, which reveal the city extended across an area of 110 acres (45 hectares) with numerous additional smaller communities surrounding it also uncovered a massive mosque, a big public square, and portions of a circuit wall and majestic gateway.

The king, also known as the Ghana, or war chief, was the leader of all leaders. His word was binding. He was the commander-in-chief of a well-organized army, the overseer of all commercial enterprises, and the chief administrator of justice.

The king had mayors, civil officials, advisors, and ministers to assist with administrative chores, but the king was always in command.

Every day, the king summoned his court and permitted citizens to air their grievances publicly. Beating drums resounded across the region, signaling the arrival of the courts, and people gathered to express themselves.

Whether it was a neighborly dispute or a case of rights violations, the king listened to the accusations and rendered his decision.

Unless dealing with criminal matters, such hearings were said to be calm. The refusal to pay a debt and the loss of blood were two of the most grievous criminal acts.

According to Islamic accounts, the criminally accused were given a nasty drink made of sour and bitter-tasting wood and water.

If he vomited after drinking the vile concoction, he was pronounced innocent and congratulated on passing the test. If he did not vomit and the liquor remained within him, he was found guilty and faced the king’s wrath.

Ghanaians were not the only ones put to the test by the king. The inhabitants of its conquered areas were also tested for good behavior and loyalty. Autonomy was granted in territories where order and obedience existed and taxes were correctly paid.

The Ghanaian king was an ideal leader who oversaw the state’s justice and religion. The emperor was shrouded in mystery, thanks in part to his status as the leader of his people’s animist religion.

Sacrifices and libations were offered in his honor, rigorous etiquette was observed in his presence, and when he died, his grave was placed in a sacred forest that no one could enter.

When the monarch wasn’t busy establishing his authority over the people, he was spreading it over the world through trade.

At its peak, Ghana was largely trading gold, and ivory, for salt from Arabs and horses, cloth, swords, and literature from North Africans and Europeans.

Ghana gained much of its wealth through trade with the Arabs because salt was worth its weight in gold, and gold was abundant in the kingdom.

Islamic traders traveled through the desert for two months to reach Ghana to transact business. These traders were taxed on what they brought in as well as what they took out.

It is no surprise that Ghana became wealthy so quickly under this system.

One of their biggest achievements was that they flourished in trade; because of the domestication of camels about 300 CE, they were able to trade across Northern Africa.

They were close to several gold mines, iron and salt deposits, and other valuables, so they could readily access them.

With this, they were able to easily become wealthy. Not only that, but they were the first united Western African empire to achieve civilizational achievement.

They were able to build many small cities, and the empire’s officials converted to Islam (since they frequently traded with Muslims in the area), influencing the religion throughout Africa.

The legend of Bida, the black snake, explains the richness of ancient Ghana mythically. This serpent requested an annual sacrifice in exchange for ensuring the Kingdom’s prosperity, therefore each year a virgin was sacrificed until one year, the prospective victim’s fiancé (Mamadou Sarolle) rescued her.

Feeling betrayed by his sacrifice, Bida exacted his vengeance on the land, and a terrible drought gripped Ghana, causing gold mining to plummet.

Archaeologists discovered evidence that supports the account, demonstrating that sheep, cows, and even goats were plentiful in the region until the 12th century.

Ghana Empire neighbors rose up against the kingdom out of jealousy, fear, and resentment at the country’s might.

Their efforts were initially modest, but in the mid-11th century, a Muslim tribe known as the Almoravids launched a catastrophic raid on Koumbi Saleh’s capital city.

Despite the seizure of territory and the imposition of a tribute levy, Ghana recovered and forced the invaders to retreat.

However, Ghana was not so fortunate less than 200 years later. The kingdom was vulnerable and unable to prevent defeat after being weakened by consecutive attacks and cut off from foreign trade.

The Ghana Empire began to fall apart around 1076 CE. Also due to trade concerns with the Saharan commercial center at the time.

They struggled to get back on their feet after this incident. Not only that, but they spent a long time living in extremely dry and hot weather, which had a significant impact on agricultural growth and the scarcity of food in the empire.

The rulers of Ghana did not help matters, however, as the empire was plagued by a series of civil wars, the divides possibly owing to the underlying tension between Muslim and animist ideas.

Meanwhile, numerous rebellious chiefs took advantage of the empire’s weak central administration to declare independence, most notably Tekrur in the Western Sudan region, which controlled the Senegal River and had even aligned itself with the Almoravids.

Sundiata also captured the old Ghana capital in 1240 CE, and he went on to build the Mali Empire (1240-1645 CE), Africa’s largest and richest empire.

Ghana was integrated into the rising nation of Mali which would soon become the next great empire.