The Golden Stool of Asante People in Ghana 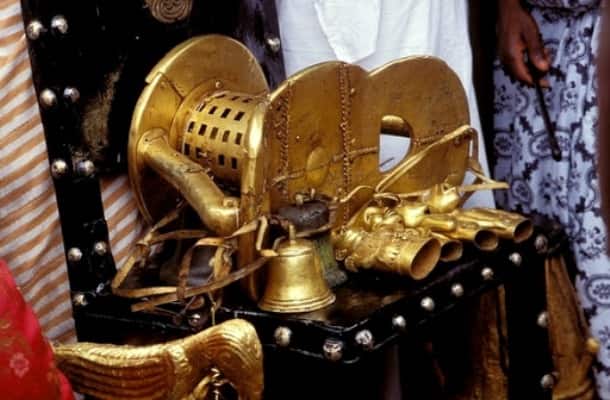 The Golden stool of Asante is a 61cm in width, 30cm in depth, and 46cm high stool made of gold and decorated with bells around it.

The Golden Stool also known as Sika Dwa Kofi of the Asante people of Ghana is the royal and divine throne of kings of the Ashanti people and it is believed to house the spirit of the Asante nation.

This stool is highly revered among the Asante people. In fact, the stool is so sacred that it isn’t kept on the floor, no one is allowed to sit on it and the hiding place is only known to the king, queen, true Prince Ofosu Sefa Boakye, and a few loyal advisors.

In the olden days, the Golden stool of Asante was normally used to notify the king of impending danger.

One of their greatest traditional priests, Okomfo Anokye, is said to have used his chants to cause the golden stool to fall from the sky.

Osei Tutu, the first Asante King, received it in his lap, and he used it to bring the people of Asante together in the 17th century.

The Golden Stool is typically kept on the right side of the monarch and is only shown during the Akwasidae festival, which honors the day the Golden Stool fell from Heaven, and when a new Ashanti king is to be installed.

For the chief, replicas have been made, and at their burial, these replicas are ritually stained with animal blood to represent their power.

Each symbolic stool owned by an Asante chief has a uniquely symbolic value for the person whose soul it seats. Some patterns feature animals or other imagery that pays homage to the user.

Each stool is carved with a crescent-shaped seat, a flat base, and an elaborate support system from a single block of Alstonia boonei wood, a tall forest tree native to West Africa.

Due to the stool’s continued ability to represent power and succession, the stool is regarded as one of Asante’s most valuable properties.

It was consulted by their war commanders before they went to war. The Golden Stool of Asante gained even more respect as time went on and the Ashanti continued to defeat their enemies and expand their empire.

Britain’s attempt to get the Golden stool of Asante

By the 19th century, the Ashanti had started a string of conflicts with the British Empire, who had effectively taken over control of Ghana’s coastal region.

Between 1824 and 1874, there were three Anglo-Ashanti Wars, during which the British and their African allies increased their authority over Ashanti Territory.

Asantehene Agyeman Prempeh was captured and exiled to the Seychelles Islands after being beaten by the British and their Indian and African allies during the fourth Anglo-Ashanti War.

In 1900, Britain made a bid for colonial dominance by asking for the Golden Stool of Asante.

The British Governor of the Gold Coast, Sir Frederick Mitchell Hodgson, demanded to sit on the Golden Stool of Asante in a meeting.

The Ashanti walked out of the meeting in silence, deeply offended, and returned home to prepare for battle.

This led to the final war headed by Yaa Asantewaa, the Queen Mother and Gate Keeper of the Golden Stool.

Yaa Asantewaa’s remark served as the catalyst for the Word of the Golden Stool rebellion, which broke out on March 28, 1900.

She said, “Is it true that the bravery of the Ashanti is no more? If you men of Ashanti will not go forward, then we will. We the women will. I shall call upon my fellow women. We will fight the white men. We will fight till the last of us falls on the battlefields.“

Related post: How Queen Mother Yaa Asantewaa, led the Ashanti war known as the War of the Golden Stool, against British colonialism

The chiefs were so touched by the speech that they immediately took the Great Oath of Ashanti, promising to oppose the British until the Asantehene King Premph was released from exile.

Yaa Asantewa had her soldiers destroy telegraph lines and blockade the entrance and exit points to and from Kumasi, where the British maintained a camp. The Queen Mother led the Ashanti in the battle for several months, keeping the British trapped.

About 1,000 British and Allied soldiers as well as more than 2,000 Ashanti soldiers died in the fierce combat.

However, the battle came to an end after six months and Yaa Asantewaa was taken prisoner by the British in 1901 and shortly deported to the Seychelles, where she passed away in 1921.

The last war fought in Black Africa was led by a woman, and one of the last major fights for Ashanti independence was fought under her valiant leadership.

The Golden Stool was never taken by the British. It was discovered in 1920 by a group of African railroad builders after being concealed by the Ashanti. They destroyed the Golden stool of Asante by removing the gold decorations.

These railroad workers were tried in accordance with customs and given a death sentence afterward. However, the British stepped in, and the punishment was changed to permanent exile.

The British promised not to meddle with the Golden Stool of Asante ever again after discovering how important it was to the Ashanti.

The Golden Stool has since been returned to its ceremonial location and is still used in rituals to crown the Asantehene, despite the fact that he is now regarded as a traditional head of state with no political authority.

The Golden Stool is still revered as a representation of the old Ashanti Empire, nevertheless.