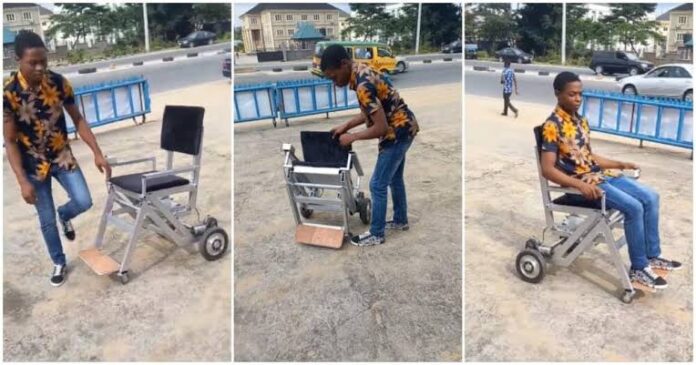 Honesty Godwin, a young man, was hailed on social media for building a folding electric wheelchair.

Honesty took to LinkedIn to showcase his creation, which he said was made with locally sourced materials.

The young innovator said he learned a lot of new things building the wheelchair and revealed that he made it from scratch.

In the attached clip, Honesty was filmed testing out the wheelchair itself. He unfolded it by pulling the backrest up. Then he locked it by pressing two buttons on the center line.

Netizens have since responded to his genius;

Adefolaju Adetona said: “This is great Honesty Godwin. God will give you everything you need to build a multi-billion company to make this product and more.”

Domingo Oluseyi Falaye said, “Great.” Hope you applied for innovation patent and trademark. This should be done as soon as possible if you haven’t already. “Best wishes.”

Hussain Adegbite said “This is amazing.” Keep up the good work, sir. “But you know, sir, you can solve many people’s problems with this technology. This is much sought after by people when they find it cheaper than the ones made by the company.

“You shouldn’t rest on your laurels, finding a way to attract investors, and you’ll be surprised how many people this technology would help, especially in a country like ours.”

Waliu Olanrewaju said: “Thank you for this pinnacle of altruism to bring relief to those in need.” Godwin Honesty With a proper understanding of engineering principles, we can solve many persistent challenges and bring comfort to those in need. “Heaven is just the beginning.”