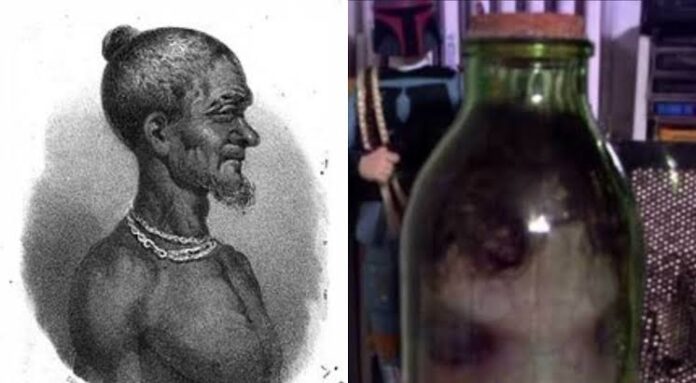 In 1838, after decapitating two Dutch emissaries and decorating his throne with their heads; King Badu Bonsu II, the ruler of the Ahanta tribe in present day Ghana, was himself beheaded by Dutch soldiers. For more than 150 years, King Bonsu’s head was lost until an author found it stored in a jar of formaldehyde in a Dutch museum. Ghana immediately asked for the King’s severed head back and; in July 2009, members of the Ahanta flew to The Hague and staged a mourning ceremony that included pouring gin libations on the floor of the Foreign Ministry before taking the head back to Ghana.

Before he was executed by the Dutch in 1838, King Badu Bonsu II, was the overlord of the Ahanta tribe in the Western Region. Badu Bonsu II, is believed to have been decapitated in retaliation for the killing of two Dutch emissaries in 1838. According to the Dutch government, Badu Bonsu II was handed over by his own ”nation” to Dutch colonists; who were then in control of a part of the former Gold Coast (present-day Ghana) that included Ahanta tribal lands. Arthur Japin, a Dutch author who discovered the king’s head when he was working on a historical novel; noted that Badu Bonsu II’s head was taken by Maj. Gen. Jan Verveer in 1838 in retaliation for the king’s killing of two Dutch emissaries; whose heads were displayed as trophies on his throne.

Preserved in a jar of formaldehyde, the head of King Badu Bonsu II was discovered gathering dust; in a laboratory in the Leiden University Medical Centre by Arthur Japin, a best-selling Dutch author.

How it was found

It had been there since its arrival in the late 1830s from what was then called the Dutch Gold Coast and is today Ghana. Japin, the Dutch novelist, explained how he had helped reunite Badu Bonsu II head with his body. ”I was researching my novel about an Ahanta boy brought to Holland in 1838, and in the process I learned about the head of the king, who had been a friend of the boy. I had been looking for the head for more than 10 years,” Japin was quoted to have said. ”Finally, in 2002 I found it locked away in a dark cupboard where it had been for more than 170 years.” After hearing of the head’s location in 2008, Ghana filed a request for its return, saying, ”without burial of the head, the deceased will be haunted in the afterlife.” 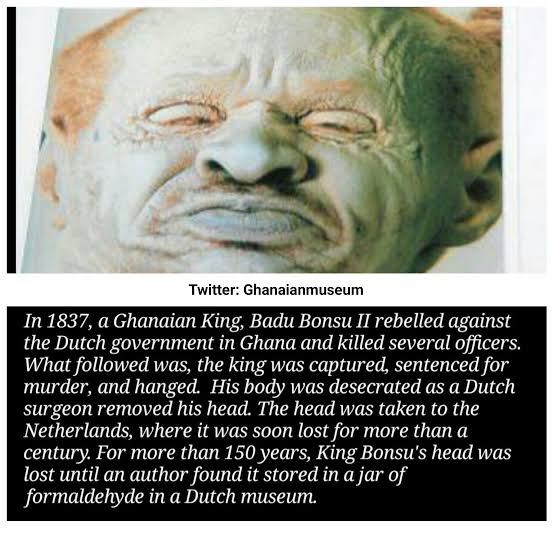 In March 2009, Ghana government officials announced that it would be returned to its homeland for proper burial. The Dutch and Ghanaian governments and a member of Badu Bonsu’s Ahanta tribe signed a pact in The Hague for the handover of the head; which remained out of sight in a room elsewhere in the foreign ministry building for the ceremony. Ahanta tribe leaders held an emotional ritual, pouring alcohol on the floor of the conference room; while invoking the chief’s spirit in the presence of Ghanaian nationals dressed in the country’s red and black mourning colours. Ghana claimed the head of Badu Bonsu II, which had been preserved in formaldehyde; in a bottle among the anatomy collection of the Leiden University Medical Center (LUMC) on July 23, 2009. 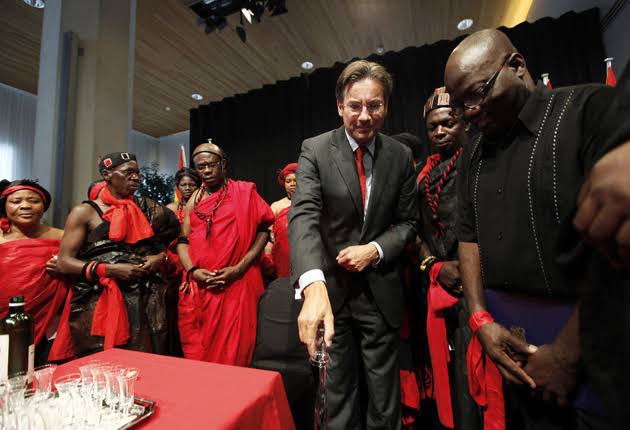