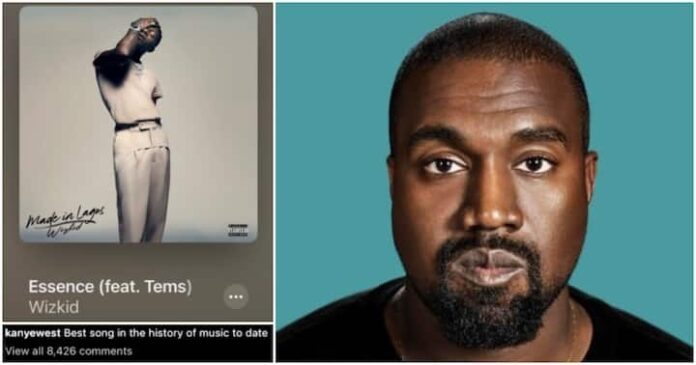 On his official Instagram page, the acclaimed rapper posted a screenshot of Wizkid’s song Essence featuring Tems and shared his thoughts on it.

According to the multi-award winning star, Essence is still the best song in music history.

The rapper wrote on his Instagram; “Best song in music history so far.”

“Essence” is a song with good vibes from Tems and Wizkid that surprised fans. With Wizkid’s position in international music, he became one of the most popular and decorated crooners of the time. He decided to team up with Tems on this excellent track “Essence”, which is now the most requested song in Africa.

Also, read; Full List of Nominees For The 2022 Headies Award

The Song of the Summer, as it is affectionately known, received worldwide acclaim and acceptance upon its release and broke numerous records. A new version of the song featuring Canadian-American singer Justin Bieber was released recently and this single act made the song one of the most popular song in the US.

Essence was the first African song to enter the top 10 of the American Apple Music chart. It is also the song that peaked in the highest position on the chart. As the US music market is very competitive, it can be considered a great achievement for a song by a Nigerian artist to be in the top 10 of the US Apple Music chart. This shows that Essence is very accepted in the US.

The song also became the second African song to become the number 1 song on Shazam in the US. This feat placed Wizkid in the top 10 artists on the US apps list, above Ed Sheeran, Lil Nas X, Doja Cat and The Weeknd.