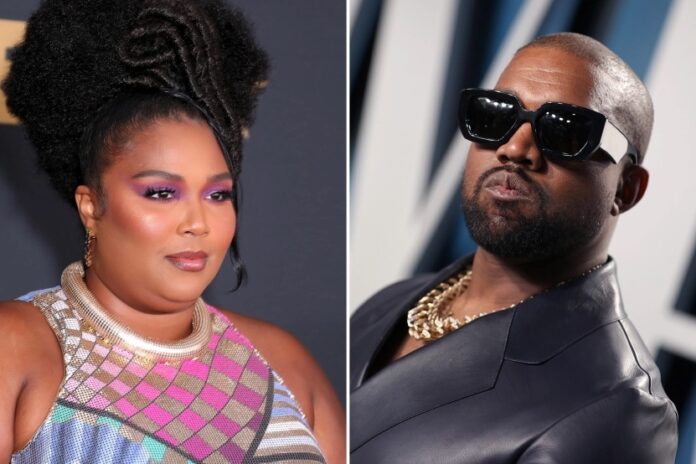 During Kanye West’s Thursday night appearance on Tucker Carlson’s “Tonight,” the rapper used his “good friend” Lizzo as the driving force behind a critique of the body positivity movement, calling the defense of her weight “demonic.”

West kicked off the conversation by telling Carlson he wanted to talk about Lizzo and Vogue editor Gabriella Karefa-Johnson, with whom he had heated yet subtle exchange earlier this week over his White Lives Matter t-shirts.

“Lizzo works with my trainer, a friend of mine, Harley Pasternak. When Lizzo loses 20 pounds and announces it, bots – that’s a term telemarketers call them – attack her on Instagram for losing weight because the media wants to make it look like obesity is the new target, even though it actually isn’t healthy”.

He continued, “Let’s put aside the if it’s fashionable- which it isn’t – or if anyone finds it attractive, to each their own. In fact, it’s clinically unhealthy. And people encouraging that is demonic.”

Supporting West’s argument, Carlson said that he noticed this trend. Lizzo has lived for free in the minds of conservative reactionaries and Fox anchors, who are happy to use any publicity the singer receives to spark a wave of malicious comments about her body.

The presenter asked West to continue and asked the rapper to explain why the media wanted to promote “community insufficiency”. West jumped to the extreme point possible and replied, “It’s genocide against the black race. They want to kill us any way they can.”

He then brought Planned Parenthood into the conversation, claiming that founder Margaret Sanger created the organization in partnership with the Ku Klux Klan.

“I think if we saw ourselves as a people and not a race, we would treat our people better,” West said immediately afterwards, without a clear line. “We just want our people to say, ‘Say it out loud, I’m black and I’m proud.’ Okay, well, what about – do you own the land you live on? The contracts are written in language that’s understandable to your origin?”

Miles from the point of origin, West finished and said, “In America, as blacks, we’re going to criticize ourselves for how well we speak, but we speak English. There’s nothing whiter than English.”

He insisted that black people not use their “native language” and condemned the judgment “of one another along white lines that are not based on exactly what our culture is based on”.