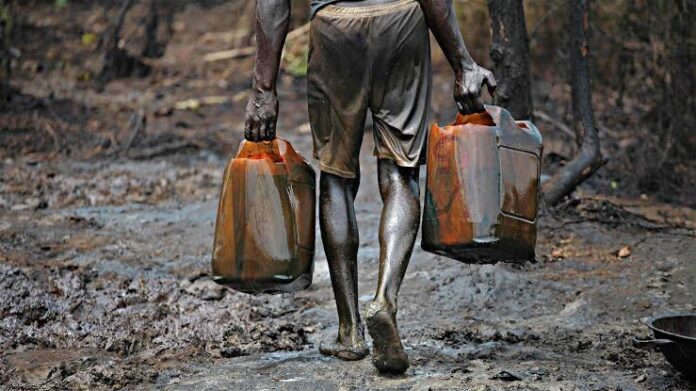 The Nigerian National Petroleum Company Limited (NNPC) says it has discovered an illegal 4-kilometre (km) pipeline from the Forcados terminal to the sea and a loading port that has been operating undetected for the past nine years.

NNPC Limited Group (GCEO) CEO Mele Kyari said as much on Tuesday when he appeared before the joint Senate committees on oil (upstream and downstream) and gas.

He said the pipeline was found during an anti-theft operation for the past six weeks.

“Oil theft in the country has been going on for over 22 years, but the scale and speed it has taken recently is unprecedented,” Kyari said.

If you conduct a reality check, you will lose 600,000 barrels per day because the Brass, Forcados, and Bonny terminals are essentially all producing nothing.

“Nigeria is losing roughly 600,000 barrels of oil per day due to oil theft, which is detrimental for the country’s economy and particularly for the field’s legitimate operators and has led to the suspension of some of their operations.

However to address the most worrying scenario, the NNPCL lately cracked down on economic saboteurs in coordination with the relevant security agencies.

Kyari said that in efforts to combat the threat, the NNPCL monitors the affected areas from the air and has seen economic saboteurs carrying out their activities unchallenged.

According to him, the current level of oil theft presents a mixture of social and security issues.

He said, “It’s not just for safety, it’s also social, as people of most regions where illegal refineries operate inadvertently work as their employees, putting them in contact with staff of licensed oil exploration and production firms in the region.”

Non-state actors are frequently used to protect pipelines and other important infrastructure, as was the case in Mexico and Cambodia, with successful outcomes.

After more than four hours of interactive session, the members of the commissions proposed the introduction of the death penalty for offenders, to be submitted to the plenary for consideration.