Mwila Tribe of Angola: A Culture Where Women Cover their Head in Cow Dung 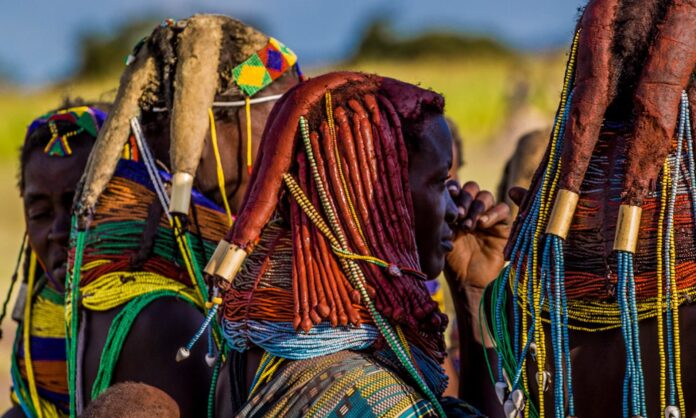 How far will you go to beautify your hair? Some people go to the extent of using egg, Indian hemp, and many other residues to improve hair appearance and growth. Here is a fascinating culture of the Mwila tribe in Angola, where their women cover their hair with cow dung.

Angola has some of the most interesting ethnic groups and cultures in the world. In southern Angola, there are the Mwila or Mumuhuila people. They are said to be a semi-nomadic ethnic group who are of Bantu origin.

In terms of occupation, they are known mostly for subsistence agriculture, growing maize, and other staples. Others engage in livestock farming – rearing cattle, goats, and fowls.

According to History, the Mwila tribe is a part of the earliest Bantus to undertake the Great Bantu Migration to settle in their present home in Angola.

The Mwilas are a formidable group. Despite other Bantu settlers fleeing Angola to Namibia due to wars, invasion by larger ethnic groups, or drought, the Mwila people are largely found in Angola.

The most dazzling and striking culture of the Mwilas is the way the women keep their hair.

Mwila Women; Their Hair and what the Hairstyles represent

A woman’s hair has been a very important part of African history and culture. For instance, there was a time it helped Benko, Boho and many more Africans escape from Slavery.

For the Mwila culture, hair is a very essential and unique part of their tradition. The women wear elaborate and unique hairstyles which have high value for their people.

The dreadlock-looking hairstyles are not just for aesthetics. The plaits are called nontombi and the number of nontombis on a woman’s head has a specific meaning. Women or girls usually have four or six nontombis. When you spot a woman or a girl in three nontombis, then it means someone has died in their family.

Another way the women portray the Mwila culture is to accessorize themselves with elaborate jewelry and the way they dress. The women are particularly known for wearing thick collars made from mud and beads.

Every period of a woman’s life determines the type of necklace they wear and the reason why they wear it at the time.

Young girls wear red heavy necklaces, made with beads and coated with mixed soil and latex. At a later stage in the girl’s life, they wear a yellow set of necklaces called Vikeka made with wicker-covered earth.

The girls wear the Vikeka until their wedding which can last up to four years. Once they are married, they wear a set of stacked-up necklaces called Vilanda.

The Mwila women after marriage never take off their necklaces and must sleep with them. Headrests are used to protect their hairstyles.

How to achieve a Nontombi

To achieve the nontombi, the women mix ochre or a red paste called oncula derived from crushed red stone

They then add dried cow dung, herbs, crushed tree bark, and a mixture of oils to the red paste which is then applied to their hair to form the nontombi. Their hair is then adorned with dried food, beads, and cowries

In recent times, many Mwila people try to westernize their dressing because when they go to the main markets outside their locality, they are made fun of by others.

Another Interesting Fact about the Mwila Culture

In the Mwila culture, the people do not mention their names in public. They have a tribal chief who serves as the head of the tribe and his next in command is a headman.

After the headman is a group of elders serving directly under him. When there is a conflict among the people, the elders and headman intervene.

The Mwila are traditionalists and they believe in Supreme beings. Hence, they call upon the diviner often. They believe in spirits too. To them, the spirits of their ancestors can either work for their good or against them.

Read more about the history of some cultures in Africa.