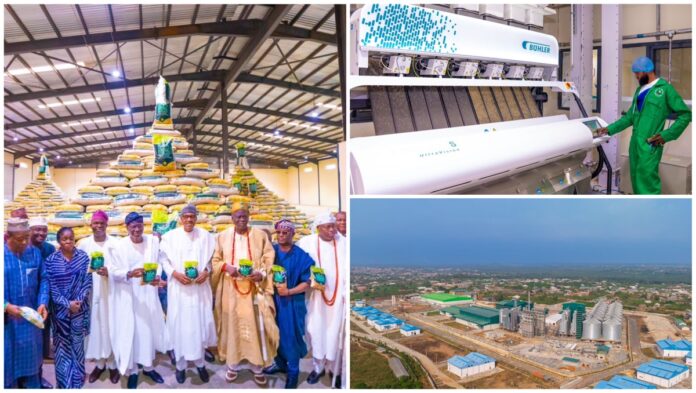 President Muhammadu Buhari on Monday inaugurated a Lagos rice mill with a capacity of 32 tons per hour in Imota, Ikorodu, a Lagos suburb, saying the mill will support Nigeria’s rice revolution.

The Nigerian News Agency (NAN) reports that the Lagos Rice Mill, Imota, is a 2 x 16 ton per hour capacity mill and is located on 8.5 hectares of land.

The project has an annual rice requirement of over 240,000 tons to produce 2.5 million 5kg bags annually.

Mr. Buhari, who landed in Imota around 5:30 p.m., was given a brief tour of the factory accompanied by Governor Babajide Sanwo-Olu, Lagos Senator Tokunbo Aberu; Corlenious Ojelabi, President of the Congress of All Progressives (APC), Lagos State and Ganiyu Solomon, President of the APC Campaign Committee, Lagos.

The Governor introduced the rice project and took a quick look at how it is produced and packaged.

According to him, the Lagos Imota rice mill is part of President Muhammadu Buhari’s agricultural revolution.

When he took office, he said Nigeria should grow what it eats and eat what it grows.

The Governor said; “We are happy that Lagos are the gatekeepers here. With 2.5 million 50kg bags of rice a year, Lagos is poised to support Nigeria’s rice and food revolution.”

“We would like to thank the local Imota communities in Ikorodu. Thank you all for patiently waiting.”

“Mr. President is really excited that we have mentioned it again for the first time in Nigeria and sub-Saharan Africa,” he said.

Mrs. Olusanya also spoke up and said the mill will produce healthy rice for the people of Lagos at an affordable price.

Mr. Fashola also said the mill will clean, cook, dry, grade, pull, polish and pack the rice using a digital machine, automatic and the “state of the art” in the world.

In his speech, the President of the All Nigeria Farmers Association (AFAN), Lagos State and South West Region, Femi Oke, commended the state government for the initiative.