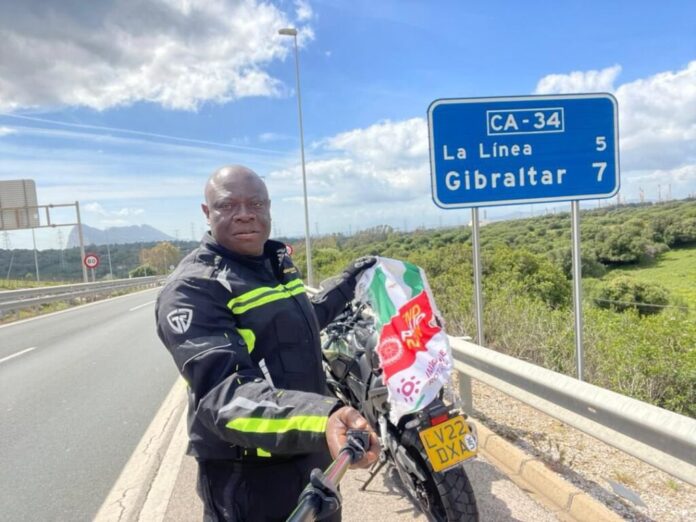 Kunle Adeyanju, the now-famous Nigerian biker, arrived in Senegal on day 13 of his London to Lagos journey. The charitable expedition is expected to last 25 days and covers 12,000 kilometers. Kunle tweeted that he had arrived in St. Louis, Senegal, after traversing the Sahara Desert through Morocco.

Kunle released a fantastic video of himself riding his bike through the Sahara Desert. The arid area presented a significant challenge for him, as he could be seen attempting to find his way through it.

Adeyanju had to come to a complete halt at one point and use his left leg to sustain the bike’s movement as it became stuck in a pool of Sahara sand. When he arrived at the Moroccan-Mauritanian border, he was halted by security authorities who thoroughly searched him, including using a sniffer dog.

Adeyanju began his journey in London with a Honda CB 500X motorbike, a vehicle suitable for the adventure he embarked on. According to sources, the bike costs at least 6,500 pounds sterling (about N5.1 million). A proof that, beyond the services he had hoped to render with his body, he also engaged in some financial sacrifices.

The Rotarian informed the world of his planned adventure via social media and also on his now-famous blog. He wrote on his blog, as quoted; “To make the ride colorful, exciting and impacting, I will be flying a banner on my motorbike all through the ride”. AdeYanju seemed not only determined to finish his task but to also promote his home country, Nigeria. This became obvious when he decided to fly the Nigerian banner.

However, the banners are the most significant of his journey. To promote the Nigerian flag and also to increase the awareness of Polio and its dangers in Africa. The end polio banner hangs below the Nigerian banner as he hopes to use this as an opportunity to promote a healthier Africa. Measuring at least 2ft by 3ft, the Nigerian flag does a good job of showing that Kunle is indeed a proud Nigerian.

Kunle Adeyanju as stated above, is a proud member of the rotary club, an institution dedicated to helping humanity. Their activeness in charity and global health is tremendous, to say the least. Perhaps this is an attestation to the decision by Adeyanju to take on the world just to prove a point, a point which he believes would, in fact, heal the world.

Interestingly, Adeyanju who has since become a global celebrity is said to be resuming as president of the Rotary Club of Ikoyi Metro in District 9110. His achievements as a member of the club are actively speaking for him as his contributions and courage are immeasurable. What makes him stand out seemingly goes beyond his involvement with the club as he had earlier been noted to have expressed interest in enlisting as a volunteer foreign fighter in the war in Ukraine.

Although he changed his mind, Adeyanju decided to do more. He chose to take on the world by traveling from London to Lagos, on a motorbike. He set up a GoFundMe account for donations. Payments are also being made directly into the account of the Rotary Club of Ikoyi Metro.

When he takes over as president of the Rotary Club of Ikoyi Metro, Adeyanju indicated that 20% of the money he raises will go to the PolioPlus fund, with the remaining 80% going to club programs in primary healthcare, WASH (water, sanitation, and hygiene), and rural empowerment programs. He intends to match all donations with a contribution of 10% from his own pocket to help the fund expand.

Kunle Adeyanju is currently in Senegal, making his way to Lagos.

Read also; All You Need To Know About The Great Ruins Of Zimbabwe