Nigeria today, as made by “Our Heroes Past” | Here are 16 of them 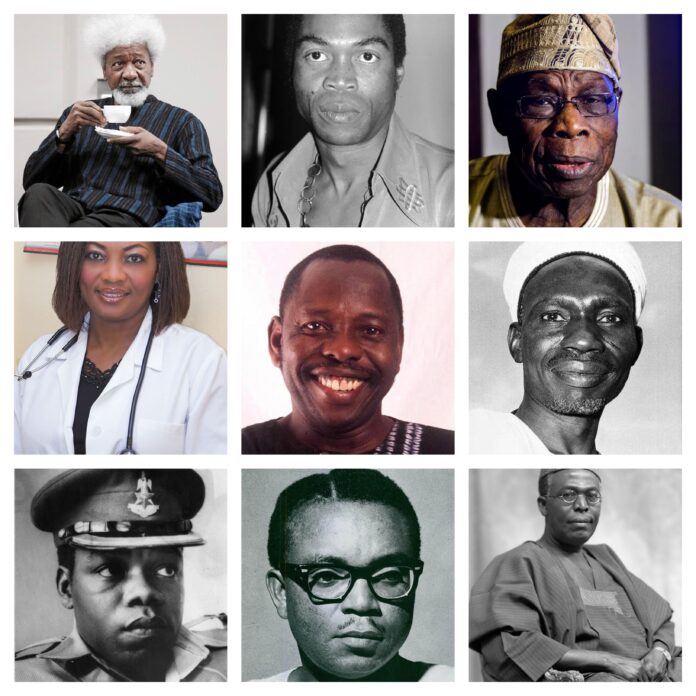 It will be wrong to talk about a people’s history without talking about the people. Nigeria as a country is one blessed and filled with numerous resources, mostly natural. It won’t be wrong to categorize those who have emerged to shape the image of the nation over the past sixty-two (62) years as “natural resources”. To commemorate Nigeria’s 62nd Independence day, we will discuss and learn about sixteen (16) notable Nigerian men and women, whose actions have contributed immensely to the history of Nigeria as a sovereign state. Below are some names worthy of mention.

Born on 6-March-1909 and died on 9-May-1987, was a Nigerian nationalist and statesman who played a key role in Nigeria’s independence movement. he was the premier (political leader) of western Nigeria between 1954–1960.

Usually referred to as “Zik”, was a Nigerian statesman and political leader who served as the first President of Nigeria from 1963 to 1966. Considered a driving force behind the nation’s independence, he came to be known as the “father of Nigerian Nationalism.

Born on December 1912 and died on 15-January-1966. He was a Nigerian politician who served as the first and only Prime Minister of the Federal Republic of Nigeria upon independence. He was elected in 1946 to the Northern House of Assembly, and the Legislative Council in 1947.

Dennis Chukude Osadebay (29 June 1911–26 December 1994) was a Nigerian politician, poet, journalist, and former premier of the now defunct Mid-Western Region of Nigeria, which now comprises Edo and Delta State. He was one of the pioneering Nigerian poets who wrote in English.

Born 4 November 1933 and died 26 November 2011, was a Nigerian military officer, statesman, and politician who served as the military governor of the Eastern Region of Nigeria in 1966 and the president of the secessionist Republic of Biafra from 1967 to 1970, which declared independence from Nigeria during the Nigerian Civil War. He was active as a politician from 1983 until his death in 2011 at the age of 78.

Born Frances Abigail Olufunmilayo Thomas; 25 October 1900–13 April 1978), also known as Funmilayo Anikulapo-Kuti, was a Nigerian educator, political campaigner, suffragist, and women’s rights activist. Fumilayo Ransome Kuti was born in Abeokuta, Ogun State, Nigeria, and was the first female student to attend the Abeokuta Grammar School. As a young adult, she worked as a teacher, organizing some of the first preschool classes in the country and arranging literacy classes for lower-income women.

Born 27 October 1956, died 19 August 2014 was a Nigerian physician. She is credited with having curbed a wider spread of the Western African Ebola virus epidemic in Nigeria by placing patient zero, Patrick Sawyer, in quarantine despite pressure from the Liberian government. When threatened by Liberian officials who wanted the patient to be discharged to attend a conference, she resisted the pressure and said, “for the greater public good” she would not release him. She is known for preventing the Nigerian index case from leaving the hospital at the time of diagnosis, thereby playing a key role in curbing the spread of the virus in Nigeria.

1925– 12 August 1984) was a Nigerian potter, ceramicist, and educator. Ladi Kwali was born in the village of Kwali in the Gwari region of Northern Nigeria, where pottery was an indigenous occupation among women. She learned to make pottery as a child from her aunt using the traditional method of coiling. She made large pots for use as water jars, cooking pots, bowls, and flasks from coils of clay, beaten from the inside with a flat wooden paddle. They were decorated with incised geometric and stylized figurative patterns, including scorpions, lizards, crocodiles, chameleons, snakes, birds, and fish.

15 October 1938 — 2 August 1997, Fela also known as Abami Eda, was a Nigerian multi-instrumentalist, bandleader, composer, political activist, and Pan-Africanist. He is regarded as the pioneer of Afrobeat, an African music genre that combines West African music with American funk and jazz. At the height of his popularity, he was referred to as one of Africa’s most “challenging and charismatic music performers”.

13 January 1931–16 October 1993, was a Nigerian author who has been called the mother of modern African Literature. She was the forerunner to a generation of African women writers, and the first African woman novelist to be published in the English language in Britain. She achieved international recognition with her first novel Efuru, published in 1966 by Heinemann Educational Books. While never considering herself a feminist, she was best known for recreating life and traditions from an Igbo woman’s viewpoint.

Wole Soyinka born on 13 July 1934 is a Nigerian playwright, novelist, poet, and essayist in the English language. He was awarded the 1986 Nobel Prize in Literature, for “in a wide cultural perspective and with poetic overtones fashioning the drama of existence”. He is the first sub-Saharan African to be honored in that category.

Chioma Ajunwa (born 25 December 1970) – also known as Chioma Ajunwa – is a Nigerian former track and field athlete and football player, notable for becoming the first Nigerian to win gold at the 1996 Summer Olympics in Atlanta and the first black African woman to win an Olympic gold medal in a field event. A member of the Nigerian Police Force, Ajunwa remains the only woman to compete at both the FIFA Women’s World Cup as a footballer and the Olympics as a track and field athlete.

Kenule Beeson “Ken” Saro-Wiwa (10 October 1941 − 10 November 1995) was a Nigerian writer, television producer, and environmental activist. Ken Saro-Wiwa was a member of the Ogoni people, an ethnic minority in Nigeria whose homeland, Ogoniland, in the Niger Delta, which has been targeted for crude oil extraction since the 1950s and has suffered extreme environmental damage from decades of indiscriminate petroleum waste dumping.

Chief Anthony Eromosele Enahoro (22 July 1923 – 15 December 2010) was one of Nigeria’s foremost anti-colonial and pro-democracy activists. In 1953, Enahoro became the first to move the motion for Nigeria’s independence which was eventually granted in 1960 after several political setbacks and defeats in parliament. Enahoro has been regarded by academics and many Nigerians as the “Father of Nigeria State”.

Nigeria as an independent political state has had its fair share of highs and lows as a developing nation. The few people mentioned above have contributed to how firm the country’s reputation is rooted in the soil of global history. Many more people have contributed their own quota to the development of the nation across different ramifications; asides the few names mentioned above. A good look into Nigeria’s past sixty-two years of independence sure has more names to offer.