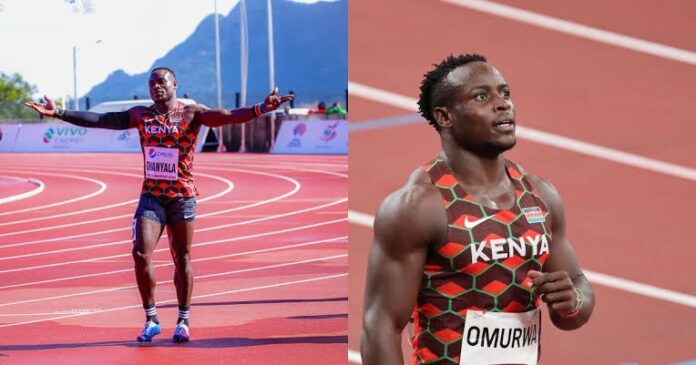 Africa’s fastest man, Ferdinand Omanyala on Saturday morning, finished third in heat 7 of the 2022 World Athletics Championships to qualify for the 100m semi-final in Oregon, US.

The athlete’s qualification comes impressively despite receiving his visa to enter the United States less than 24 hours before the event.

According to his fans, the Visa approval and the unfortunate timing should have stopped Omanyala as he was noted to have had very little time to prepare.

Fortunately, this wasn’t the case, as he went ahead to prove his status as Africa’s fastest man despite little to no preparation time.

Omanyala, who is on the shortlist for the 100 meters race had initially announced that he would not compete due to the delay in applying for a visa.

However, the sportsman changed his mind after the visa was approved just hours before the race.

Regardless of the lack of preparation time, as his flight from Kenya to Oregon is said to be “+18 hours, he has 3 hours after landing to clear customs, get to the arena, pick accreditation, warm up, then compete with the other (well-rested) athletes,” Nancy Kachungika explained on twitter.

A spokesperson for the Kenyan athlete told Reuters that the sprinter received his visa on Thursday, adding that the delay was likely due to the significant backlog of cases attributed to closures due to COVID-19.

“Visa challenges are faced by all Kenyans and people daily, in this case, I was no different,” Omanyala added.

Despite the visa challenges, he finished third behind Abdul Hakim Sani Brown, who won the race with a season-best time of 9.98 seconds, while Australian Edward Osei-Nketia was second with 10.08 seconds on the clock.

The semi-finals are scheduled for 4 am on Sunday and Omanyala hopes to be fit for a spot in the final.

Recall that Omanyala set the African men’s 100 meters record after setting a time of 9.77 seconds at the Kip Keino Classic meeting in Nairobi in September 2021.

The 26-year-old won the African 100m title last month and became the first Kenyan to qualify for the 100m semifinals at the Tokyo Olympics last year.

He said he will also participate in the Commonwealth Games, which will take place in Birmingham, UK, from July 28.