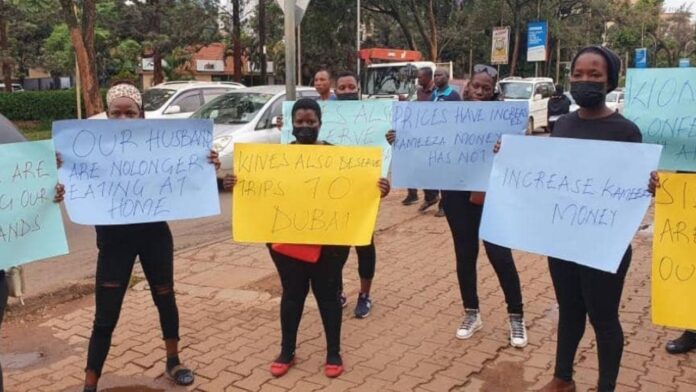 On Monday, April 11, a group of enraged housewives in Kampala, Uganda, mounted a peaceful protest to air their grievances against their Cheating Husbands and their Side Chicks.

The women were protesting their husbands’ lack of appreciation to them and for the meager maintenance money they receive. While others said they deserved vacations to Dubai as there has been an increase in the rate that Ugandan married men sponsor their side chicks to fun trips in Dubai, and give them other expensive presents.

They went on to say how the men spend a lot of money financing their mistresses to go on lavish holidays to the detriment of their suffering wives, who are often struggling to make ends meet.

The women carried placards with various inscriptions expressing their frustrations throughout the rally.

Photos of the demonstration have been circulating online, eliciting a wide range of comments, with some expressing support for the women and others mocking the situation.

The Uganda Police Force, however, is alleged to have claimed that the demonstration was illegal.

The women who were protesting over the minimal amount of money that men leave at home have been arrested, according to the Daily Monitor.

The demonstration was illegal, according to the Uganda Police Force, and the women were arrested at CPS in Kampala.

The role side chicks play according to a Ghanaian

In October last year, a married Ghanaian woman who claimed to have permitted her husband to have a side-chick remarked that side-chicks play an important part in marriage survival.

Marriage, according to the woman merely known as Naa, is a burden in and of itself, and having someone ready to share the weight should be cherished.

She revealed that she knows her husband’s mistress personally and respects the job she [side-chick] has been doing on her behalf for her spouse, who resides in another country.

There are a whole lot of hysterical things you’d see on the internet, and this is one of them.