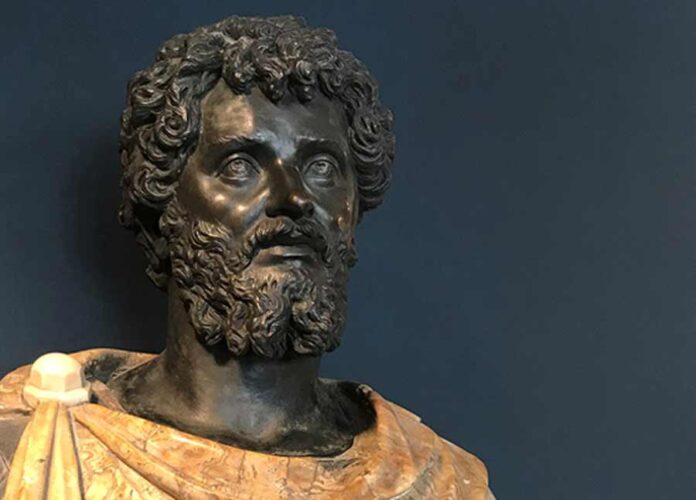 67Only a few people have ever heard of the African Roman Emperor who influenced Britain in the first century. His name is Lucius Septimius Severus, born on 11 April 145 and died on 4 February 211. He was a black Roman Emperor born in Leptis Magna, present-day Al-Khums in Libya. Severus was born into a family of great wealth and they were distinguished and of equestrian rank. His mother was of Italian descent and his father was from North Africa. He was the first emperor born into a regional family of non-Italian origin. 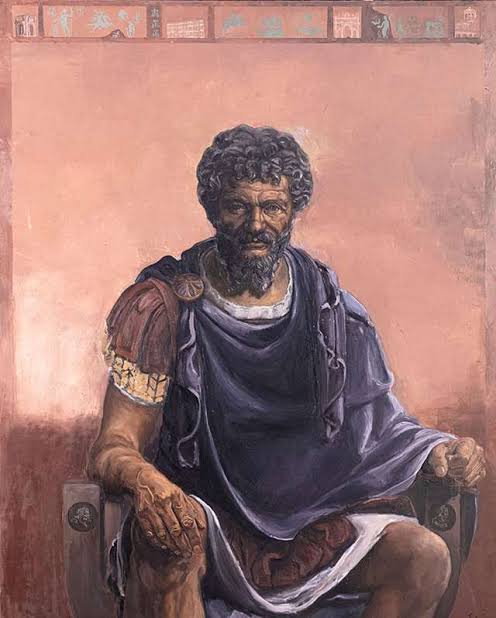 His mother’s ancestors came from Italy to North Africa. They belonged to the gens Fulvia, an Italian aristocratic family that had its origins in Tusculum.

Septimius Severus had two siblings, one older, Publius Septimius Geta, and one younger, Septimia Octavia. His cousin from his mother’s side was the praetorian prefect and consul Gaius Fulvius Plautinus.

The childhood home of Severus was in Leptis Magna, and he was fluent in speaking the Punic language. He was educated in Latin and Greek and spoke the language with an accent. According to Cassius Dio, he was far more eager for education than the one he received. He received his lessons verbally; and By age 17, he had given his first speech.

He trained and held many offices under the reign of renowned Marcus Aurelius and Commodus. He started seeking a public career in Rome in 162.

His relative Gaius Septimius Severus recommended him. Marcus Aurelius who was emperor between the years 161 and 180 caused him to gain entry into the senatorial ranks.

To gain positions in the cursus honorum and the Roman Senate, you needed to be a member of the senatorial order. His career met difficulty in the 160s.

He was said to have served as vigintivir in Rome and was overseer over road maintenance in and around the city. This remarkable man also appeared in court as an advocate. He was State Attorney during the reign of Marcus Aurelius.

However, since he omitted military tribunate from the cursus honorum, his quaestorship was delayed until he reached the minimum age of 25.

There is also the matter of the Antonine Plague that swept through the capital in 166.

While waiting to turn 25, he returned to Leptis for a short while where the climate was healthier.

Towards the end of 169, he attained the age required to become a quaestor and returned to Rome. He took office on 5 December and was enrolled officially in the Roman Senate.

There are no records of his activities over ten years (170-180) although it is noted that he occupied an impressive number of positions in quick succession.

The Antonine Plague thinned out the Senatorial ranks and capable men were in short supply, this paved the way for tremendous growth in his career.

When his father died suddenly, he returned to Leptis Magna to help settle family affairs. While their Mauri tribesmen invaded southern Spain. The control of the province went to the emperor, and the Senate gained temporary control of Sardinia as reparation. Thus, he spent the remainder of his second term in the senate as quaestor on the island of Sardinia.

In 173, his relatives Gaius Septimius Severus was appointed proconsul of the Province of Africa. Gaius chose his cousin to be one of his two legati pro praetors, this is a senior military appointment.

When Septimius Severus’ term ended, he returned to Rome and took up office as tribune of the plebs, a senior legislative position. He had the distinction of being the candidate of the emperor.

The love life of Septimius Severus

In 175, Septimius Severus was in his early thirties and got married to Paccia Marciana; she was from Leptis Magna, his hometown. Septimius’ wife may have been Punic or from Libya. She died after a decade of the marriage of natural causes.

Septimius venerated her with statues when he became emperor.

In his forties, he married again a Syrian woman, of whom it was foretold that she would marry a king. She was an Emesene Syrian named Julia Domna. Her father was descended from the Arab Emesene dynasty and was a high priest to a local cult of the sun god.

Her father accepted his proposal in 187 and they were married in the summer in Lugdunum, which is modern-day Lyon in France. Severus was governor at the time in France.

This proved to be a happy and strong marriage. He valued Julia and her political opinions. She built a most impressive reputation by writing letters and philosophy. She bore him two sons Lucius Septimius Bassianus (Nickname: Caracalla and born 4 April 188 in Lugdunum) and Publius Septimius Geta (born 7 March 189 in Rome)

He took power after a Roman emperor, Pertinax died in 193.

This year is known as the Year of the Five Emperors. After he died, Didius Julianus bought the emperorship in an auction. The Senate condemned him to death and he was killed. Severus took possession of Rome with no opposition.

He executed Pertinax’s murderers, dismissed the Praetorian Guard, and filled its ranks with loyal troops from his legions.

Relations with the Senate and People

The relationship with the Senate was never good. He was unpopular because he seized power with the help of the military.

The black Roman emperor responded by executing a large number of Senators on charges of corruption or conspiracy against him and put his favorites in their position.

He succeeded in stamping out the corruption from Commodus’s reign and this made him popular with the citizens of Rome. On the flip side, Rome was more like a military dictatorship.

The Influence Of Septimius Severus on the British

He responded to the cry for help by the British governor. He needed protection from brigands who were attacking British citizens.

In response to the danger, he built the walls of Roman London, about a square mile to help protect London. These walls are defined by what Septimius Severus did for Britain.

He set up camp in York and fought alongside garrisons to help protect London from the dangers. After killing the incoming emperor, Didius Julianus, he fought other claimants to the throne and defeated them.

The claimants were Pescennius Niger and Clodius Albinus. Niger was defeated at the Battle of Issus in Cilicia, while Albinus was defeated three years later at the Battle of Lugdunum in Gaul. A short punitive campaign beyond the eastern frontier won him the Kingdom of Osroene as a new province.

He waged wars in the east against the Parthian Empire and sacked the capital in 197. This helped to expand his territory on the eastern frontier to Tigris. His territory increased and was fortified at Limes Arabicus in Arabia Petraea.

He campaigned in Africa and Mauretania against the Garamantes in 202. He captured their capital Garama and expanded the Limes Tripolitanus close to the southern desert frontier.

He made two of his sons Caracalla and Geta co-emperors in the years 198 and 209 respectively. They were born to his second wife, Julia Domna.

In the year 208, he traveled to Britain in 208, strengthened Hadrian’s Wall, and occupied Antonine Wall again.

He invaded Caledonia, which is Scotland today, with a 50,000-man army. His ambition was halted when he fell ill with an infectious disease in 210. He died in 211 at Eboracum, which is modern-day York in England.

Severus is famously said to have advised his sons:

“Be harmonious, enrich the soldiers, scorn all others”

On his death, Severus was deified by the Senate and succeeded by his sons, Caracalla and Geta, who was advised by his wife Julia Domna.

His sons succeeded him and their mother, Julia Domna served as an adviser. This founded the Severan dynasty.

This was the last dynasty of the Roman Empire. It preceded the Crisis of the Third Century.

Also read: Some African Queens of Boldness and Nobility