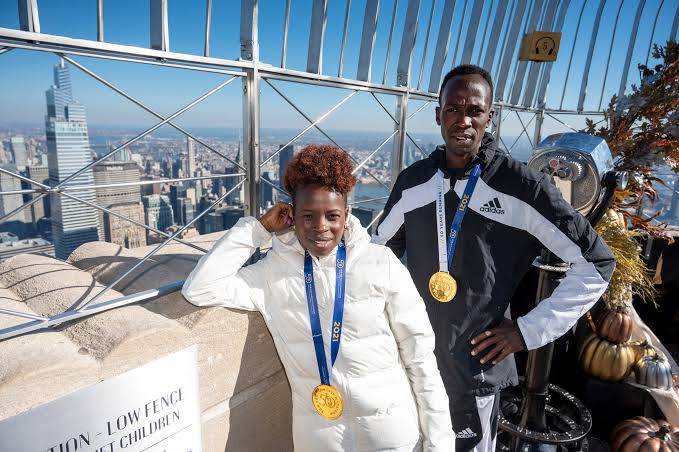 After the chaotic effects of the covid 19 pandemic, the New York City marathon has returned; and Albert Korir of Kenya won the New York City Marathon men’s race Sunday, two years after coming in second; while Jepchirchir becomes the only woman to take a marathon major in the fall after earning an Olympic gold medal.

Albert Korir overtook Morocco’s Mohamed El Aaraby and Italy’s Eyob Faniel around the 18th mile and quickly took the drama out of the race’s 50th running. He won in an unofficial time of 2 hours, 8 minutes and 22 seconds.

The second oldest of the world’s marathon majors returned Sunday after cancelling in 2020 due to the coronavirus pandemic. The field was cut by about 40% to around 30,000 runners, with efforts made to maintain distance between competitors near the start and finish lines.

It was Korir’s first victory in one of the World Marathon Majors and his first time atop any podium since winning the Ottawa Race Weekend Marathon in 2019.

The 27-year-old Korir finished second to Geoffrey Kamworor in 2019 by 23 seconds.

Korir and fellow Kenyan Kibwott Kandie were side by side as they passed El Aaraby and Faniel; but Kandie – the world record holder in the half marathon – fell off in his marathon debut.

El Aaraby held on for an improbable second-place finish after coming in 11th at the Tokyo Olympics. Faniel was third.

Jepchirchir broke away from countrywoman Viola Cheptoo and Ethiopia’s Ababel Yeshaneh in the final mile of the race after the trio ran side by side from the Bronx back down through Manhattan.

28 year old Jepchirchir, took gold at the Tokyo Olympics marathon in August and came back; on a short recovery to win a race once dominated by her hero Mary Keitany, a four-time winner in New York who recently retired from the sport.