Despite Protests, UK Court Refuses To Halt Transfer of Refugees To Rwanda 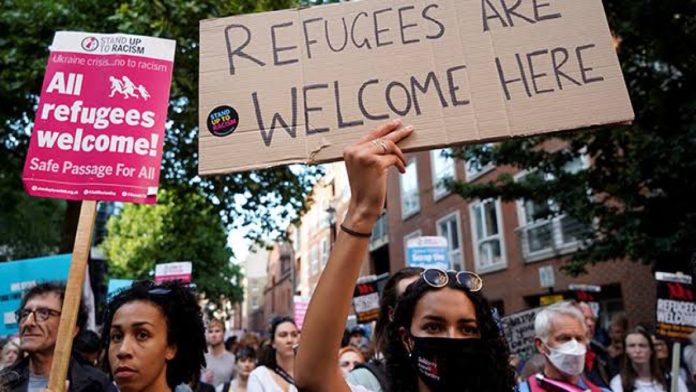 Despite intense protest from dozens of Citizens, a UK court has ruled for the first flight to take refugees from the UK to Rwanda.

The court of Appeal in London ruled in favor of the “Rwandan plan” which involves moving asylum seekers, otherwise called refugees, from the UK to Rwanda, to ease the burden of care on the country.

While several people have come out to slam the plan and also protest against it, a judge in the Court of Appeal outright dismissed the cries of protesters, Charities and a trade union who had launched an appeal against the government’s plan.

The judge, Rabinder Singh claimed on Monday that despite the protests, it is not in the place of the court of appeal to interfere with the rulings of the High Court judge which was given earlier and was said to be “clear and detailed” enough in its express statement, ruling that there will be no permission for further appeals.

With the court ruling being clear and detailed as stated above, the UK government has made its intentions clear and has therefore pushed for the first flight from the UK to arrive in Rwanda with asylum seekers in the first half of June.

According to reports, the first flight would contain at least 31 claimants on a chartered flight on Tuesday from an undisclosed airport.

Although details on the flight, the airport it is to take off from, and that which it would land are yet to be given as well as information on those who have been selected for deportation.

However, what seems quite obvious at this point is the information earlier provided by charity organizations against the plan. They claimed that many of the refugees are from Afghanistan and Syria.

The “Rwandan plan” was challenged in the High Court on Friday by two refugee organizations and a trade union, who said that it was immoral, hazardous, and counterproductive.

On Monday, the same groups filed an emergency appeal with the Court of Appeal. The High Court proceeded to hear the arguments from Asylum Aid, a refugee organization that had filed a second legal appeal to prevent the government from transporting migrants to Rwanda.

The government’s plan to offer asylum seekers seven days to seek legal assistance and present their case to prevent deportation, according to the organization, is misguided and discriminatory.
This case is being handled by the same judge who denied the first injunction request on Friday.