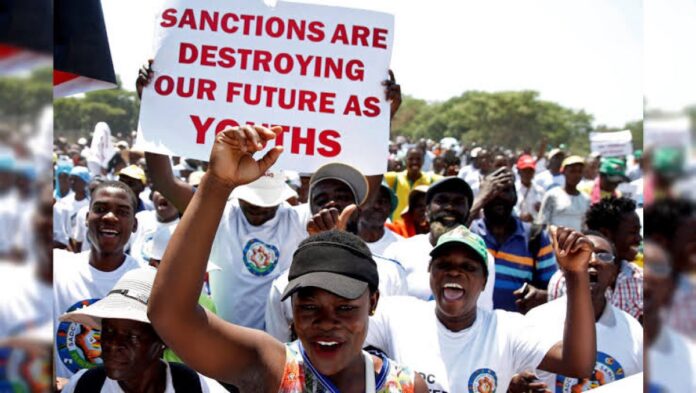 Hundreds of Zimbabweans attended rallies on Tuesday against Western sanctions, which the government has long blamed for the country’s economic woes.

The sanctions, some of which are 20 years old, were imposed in response to the alleged electoral manipulation and rights violations of former President Robert Mugabe, who died in 2019.

Although, the US and Britain have repeatedly claimed that targeted sanctions are not the cause of Zimbabwe’s problems.

About 500 Zimbabweans gathered in the city of Bulawayo on Tuesday for an anti-sanctions rally organized by the ruling ZANU-PF party.

One of the protesters, Mabutho Moyo, said US and UK sanctions had caused Zimbabwe’s economy to collapse because industries could no longer obtain lines of credit.

“People are losing jobs, and job losses lead to poverty,” Moyo said. “And finally, poverty with high death rates, as you saw in Zimbabwe. But as [Zimbabweans] we remain resilient. We don’t allow ourselves to just cry. And with the leadership of comrade Emmerson Mnangagwa, we will not beg anyone for support.”

“The sanctions regime undermines the principles of the human factor approach of nations in pursuit of socially sustainable economic development. They are an attack on Zimbabwe’s freedoms and sovereignty,” read Chiwenga.

“Furthermore, illegal sanctions are contrary to the principles and regulations of international law. They challenge the notions of equality of nations enshrined in the Charter of the United Nations and the values of global governance,” the Vice President added.

US, UK and EU officials have long denied Zimbabwe’s allegations, saying the sanctions are aimed at specific individuals and companies rather than state institutions.

They say economic mismanagement is the main factor behind Zimbabwe’s long economic recession, which dates back to 2000.

Last week, James O’Brien, the US State Department’s sanctions coordinator, told an online news conference that US sanctions do not harm the Zimbabwean economy because they do not affect banks.

A much bigger problem is the billions of dollars in tax revenue lost due to cross-border black market transactions that occur every year.

He added that “these measures do not concern commercial or economic measures. UK-Zimbabwe trade was worth $175 million last year and we are working hard to increase that value.”

The embassy said: “We want Zimbabwe to succeed. Anything that suggests that Britain wants to harm Zimbabwe is simply wrong.”