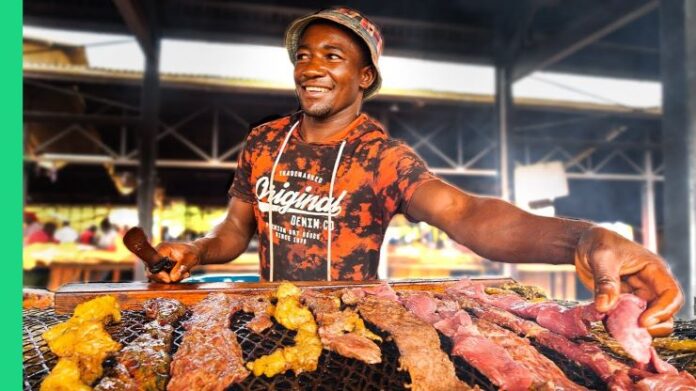 Trying out the local street cuisine is one of the best parts of visiting a new place. You have more than 50 countries to select from in Africa, and each African street food has a deliciously distinct cuisine that will leave you spoilt for choice.

African street food is not only flavorful and spicy; it also has a long history and is very diverse, having been influenced by people of African, Latin American, European, and Asian ancestry since the time when the Pyramids of Giza were being built.

One of the greatest and most genuine ways to experience a country’s culture and people is through its street food, which is cuisine made and sold by the inhabitants who call that country home.

Here are 10 of our best African street food anytime, any day.

The first African street food on our list is the traditional Ivorian couscous called “attiéké”. This meal is made with crushed, fermented cassava roots. Typically, it comes with grilled chicken, tomatoes, onions, or fried fish.

People of all ages eat this delicious dish for breakfast, lunch, and dinner even though it is historically only made by women.

It can be purchased in bulk bags or in individual servings at many neighborhood markets in the country.

The rice and bean meal known as waakye is currently eaten all over Ghana, despite its origins in the country’s north.

This dish can be made as rich and satisfying as desired by adding an almost infinite number of accompaniments, whether it is eaten for breakfast or lunch.

The most popular ones include fried plantains, talia, which is similar to spaghetti, shito, which is a black pepper sauce, boiled eggs, avocados, a meat-based tomato soup, and gari foto, a mashed sauce created from finely shredded cassava.

The traditional pancake known as mahjouba is one of Algeria’s most well-liked street foods and also tops number three on our list of African street food.

Semolina is used to make these hefty, flaky pancakes, which are then filled with a mixture of tomatoes and caramelized onions. Harissa sauce is frequently served alongside mahjouba, but it’s not a requirement.

This well-known Nigerian meal uses thin slices of beef or chicken that are highly seasoned and then roasted over open charcoal grills. It is thought to have originated among the Hausa people.

Each suya must have the dry spice mixture known as suya or yaji, which is created by mixing pulverized red peppers and peanuts.

The spice mixture is adaptable and may include different extra components depending on the locale. The skewers are typically sold separately in Nigeria and are mostly used as an inexpensive, quick, and wholesome snack while on the road.

They are frequently served in restaurants with vegetables like tomatoes or thinly sliced onions.

Sardines are one of the most popular street foods in Morocco, which also happens to be the world’s largest exporter of them.

Sardines are deep-fried after being flavored with a paste comprised of tomato, coriander, chile, garlic, paprika, cumin, olive oil, and lemon juice, and are known as Marrakech’s take on fish and chips. It comes with bread and the option of adding chips.

The three most popular breads sold in Morocco’s souks are harsha, a buttery bread made of fine semolina, rghaif, a flaky and layered flat bread, and beghrir, which is constructed similarly to crumpets.

Shawarma is a delicious Middle Eastern meat dish that is marinated and spit-roasted. Its name, which refers to the rotating skewer on which the meat is cooked, is derived from the Arabic pronunciation of the Turkish word çevirme (lit. to turn; turning), which can be traced back to the Ottoman Empire era.

The main ingredients in shawarmas are either lamb, turkey, chicken, beef, or a combination of these meats. The meats are slow-cooked for many hours and basted in their own juices and fat to achieve an unrivaled succulence, but the marinade is the actual key to a superb shawarma.

The unofficial national cuisine of Kenya is called nyama choma, which is Swahili for grilled meat. Across the nation, from roadside shacks to fine dining establishments, the meat is typically served roasted and is either goat or beef.

It frequently goes with regional beer and side dishes like ugali. There’s no way this wouldn’t have been on our list of best African street food. It is worth trying out whenever you visit Kenya.

A simple yet savory national meal of Egypt, kushari is also known as koshari, kosheri, koshary, and koushari and is made of rice, pasta, and lentils. The word “khichri,” which describes a rice and lentil dish in Hindu, is the source of the name.

When in Egypt, it is sufficient to hunt for warm, delectable pyramids on sizable, glossy metal platters, as it is also a very well-liked street snack. Rice and tiny yellow lentils are cooked slowly in a hearty broth with crunchy fried vermicelli and butter-browned onions.

To obtain a crispy, layered texture, laminated pastry layers are typically used in the preparation of brik.

The stuffing-filled pockets are expertly folded, deep-fried for a brief period of time, or baked in the oven. The most popular filling is made with tuna and traditional North African spices like coriander, chile, pepper, or cilantro.

Frequently, a raw egg is placed on top of the tuna mixture, the flaky pastry is folded delicately, and the egg partially cooks inside.

The South African bunny chow is a well-liked street food that originated in Durban, in the province of KwaZulu Natal, and has been modified by locals to suit their own culinary preferences. The Durban bunny chow is made of hollowed-out bread that is filled with spicy curry. Other options include stuffing the bread with whatever you like, including fried chips!