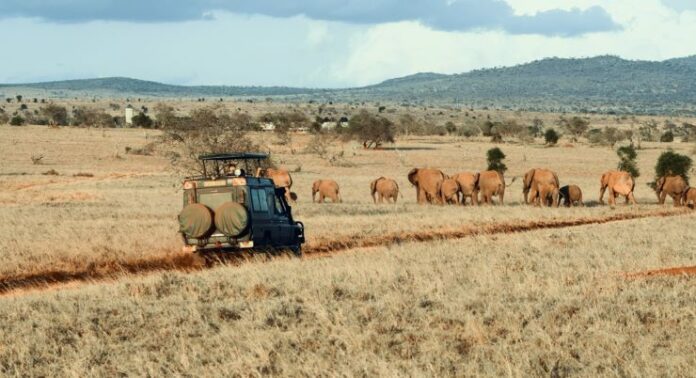 By now, it is no surprise to say that Africa is blessed with sceneries that take one breath away. Given its size, it is not surprising that many tourists from over the world visit there to go on safari and view its enormous plains, deserts, and grasslands.

It can be intimidating because there are so many options available. However, we’ve put together a list of our best safaris in Africa to assist you in making the right decision.

Most tourists may not consider Namibia to be one of the top destinations in Africa, but after visiting Etosha National Park, you’ll think differently.

In 1907, it was declared a national park. Its name is an homage to the Etosha Pan, a portion of a dried-up lake, which is described as “the region where no vegetation grow in Ovambo.

Staking out by a spring-fed waterhole and watching for animals to arrive is one of the best safari activities in the national park. The dolomite hills and the dry savannas form a stunning view in the Etosha National Park.

Indeed Etosha National park is unarguably one of the best safaris in Africa.

Next on our list of the best safaris in Africa is Serengeti National Park, which is among the most recognizable and well-known safari locations, particularly for first-timers.

The annual migration of wildebeest and zebras, which come to the Serengeti every year to give birth, is what makes the Serengeti a UNESCO World Heritage Site.

White-bearded wildebeest calves are born on the plains in the southern part of this park in February.

Everyone should experience this stunning sight at least once in their lifetime. You’ll observe zebras caught in the migration as well as many antelope species.

If you’re going on a safari for the first time, you won’t want to miss the opportunity to observe animals in their natural setting, which you can do in the Kruger National Park.

This park is larger than a small country at over 7,500 square miles! The Kruger National Park offers a genuinely exceptional experience and is regarded as one of the best places in the world to see games.

In addition to the big five, there are a variety of additional creatures to view in this national park, such as, Cheetahs, Hippos and snakes from the Nile.

The most enjoyable method to observe the huge plains is to ride a camel, which is the ideal way to explore this vast area of land.

The park can also be seen while mounted on a horse or on a guided walking safari. There is a lot of water available during the dry season, filling watering holes where animals can go to drink.

This feature makes the trip more intriguing for photographers who want to capture the wildlife in its natural setting.

The Moremi Game Reserve is the ideal location if you’re searching for a fantastic game reserve in Botswana.

The Okavango Delta, the 1000th UNESCO World Heritage Site in the world, is home to this safari. F

our of the Big 5 are known to frequent this game reserve, and you’ll likely encounter a lot of them while on your safari.

More than 400 different bird species can be found there. It’s also common to watch games here. The dry season, which runs from June to September, is the ideal time to explore this game reserve.

You can go on a walking safari or a mokoro canoe safari to discover the wilderness. You will be struck by the magnificence of nature as you look at the floodplains and baobab trees.

The Sabi Sand Game Reserve is a collection of private reserves that are situated close to the southern Kruger. This broad savannah is a popular destination for treks and wildlife drives.

In the reserve, the big five are among the most frequently encountered creatures. This reserve is well-known for its breathtaking night drives where you can witness nocturnal animals.

The game reserve is renowned for its exceptional birdlife as well. You’re in for a treat if you enjoy viewing birds at this location. It is advised to travel to this location between May and September, which is considered the low season.

One of the most well-liked safari locations in Africa is the Masai jungle. This vast wilderness, which is a part of the Great Rift Valley, is home to the Big Five as well as a sizable population of cheetahs and wild dogs.

Due to the area’s reputation for having a high density of animal population, the game drives here are fantastic. In this national reserve, there are many safari lodges, and reservations are frequently made months or even years in advance.

One of the most well-liked safari locations in Africa is the Masai jungle. This vast wilderness, which is a part of the Great Rift Valley, is home to the Big Five as well as a sizable population of cheetahs and wild dogs.

Permanent swamps and occasionally flooded plains are both parts of the Okavango Delta. The delta is made up of interconnected rivers and lakes that are home to a variety of animals.

It is one of the largest interior delta systems, and its wetland system is almost completely uninterrupted.

If you want to go bird watching, the Okavango Delta is a great place to go. You might be fortunate and spot some unusual birds. This safari will astound you with its beauty if you enjoy taking photos.

One of the most beautiful and best safaris in Africa may be found in Mana Pools National Park. It is also renowned for having a large elephant population.

For those with a sense of adventure who wish to see lions, wild dogs, and leopards, this safari is a fantastic place to go.

This park’s unfenced campsites in the heart of the woods are one of its biggest attractions. For the best experience, pick a hotel close to the Zambezi river if you wish to stay in this kind of lodging.

Go on a canoeing safari if you’re looking for something different. One of the few parks in Africa that allows unaccompanied exploration is Mana Pools, though this is not recommended for beginners.

This is a fantastic safari if you enjoy going on wildlife drives and on nature hikes. This park’s sparse vegetation makes it one of the greatest locations for walking safaris.

The Lower Zambezi National Park should also be on your list of places to visit in Zambia. Despite the eradication of the rhino population due to poaching, it offers one of the best safaris in Africa today.

The big five and several other kinds of animals and birds can be found in the Lower Zambezi. Additionally, a variety of bird species can be seen here, such as African jacanas, Southern ground hornbills, and Blacksmith Lapwings.