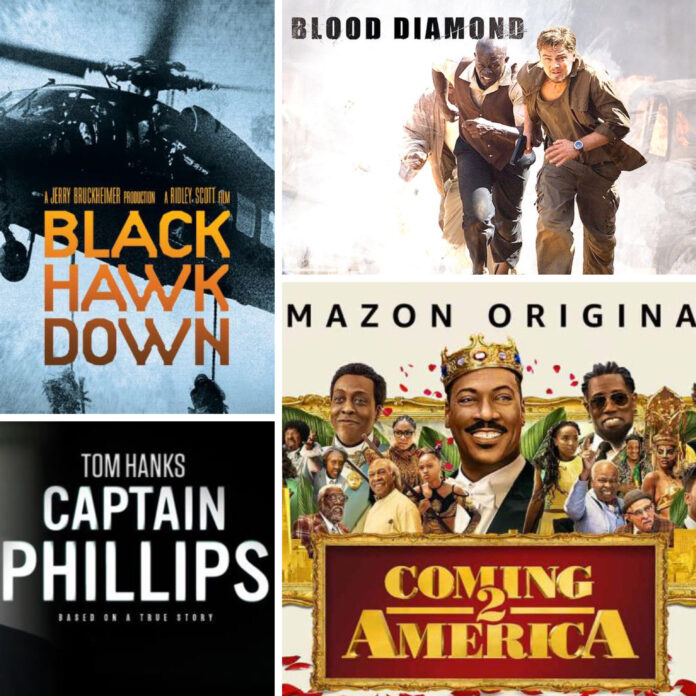 Africa is rich in history so it doesn’t come as a surprise that Hollywood borrows from African cultures in both significant and subtle ways.

The good side of this is that the continent is beginning to get the recognition and accolades it deserves.

According to Business Insider Africa, the movies on this list were selected by cultural influence, cultural insight, box office performance, engagement, and critical approval.

Want to know what movies they are? Keep reading.

This comedic classic, which was popular in the 1990s, is most probably responsible for the myth that all African royalty speaks with a strong local English accent.

Coming 2 America is one of the Hollywood movies inspired by African culture because the story was based on an African prince in search of love.

Eddie Murphy who played the role of Prince Hakeem, was a wealthy African prince looking for a woman who will love and cherish him despite the fact that he was a prince.

Akeem flees to America with his friend Semmi, to find his queen in order to avoid an arranged marriage.

He falls in love with Lisa while disguised as a foreign student working in fast food, but he fights with disclosing his true identity to her and his marital intentions to his king’s father.

The classic movie scores of 7.1/10 on IMDB and 73% on Rotten Tomatoes, respectively.

Another classic and undoubtedly one of the best Hollywood movies inspired by African culture is The Lion King.

This timeless film, which is debatably the one with the most African themes, recounts the adventures of Simba, a lion who is tricked into believing he is to blame for the death of his father.

With its franchise grossing close to $3 billion in total, this film is among the best box office performers ever.

In 2019, the remake made a revenue of about $1.66 billion. This film has a 93% approval rating on Rotten Tomatoes, according to IMDB.

The fact that such a lovely tale is based in the African Savanna plains also brings about a great deal of delight.

Although this movie hasn’t received the best reviews and its references to African culture are at best sketchy, this film nonetheless manages to captivate audiences as evidenced by its box office success.

The movie is about Nick Morton, a soldier who raids ancient ruins in search of timeless treasures and sells them to the highest bidder.

When Nick and his partner are attacked in the Middle East, the subsequent struggle accidently brings to life Ahmanet, a betrayed Egyptian princess who has been buried for thousands of years under the desert.

Now, Morton must stop the reborn creature as she goes on a frantic rampage through the streets of London.

It also makes use of the long-standing myth about resurrecting mummies. Being one of the Hollywood movies inspired by African culture, this movie has a 7.1/10 rating on IMDB and a 61% rating on Rotten Tomatoes.

Black Hawk Down is another intense movie on this list of Hollywood movies inspired by African culture.

The film is based on when the United States sent special forces into Somalia to destabilize the government and bring food and humanitarian relief to the malnourished population.

Led by Mike Steele, these special forces were also on a mission to kill two lieutenants of a violent Somalian warlord in the city of Mogadishu.

However, an unexpected attack by Somalian forces causes two of the Black Hawk helicopters to crash.

The US soldiers must then struggle to restore their equilibrium while under intense gunfire from all directions and trapped in an unfamiliar area.

The film has a respectable Rotten Tomatoes score of 77% and an IMDB rating of 7.7/10.

Some say the movie is based on the Rwanda genocide while others argue otherwise.

However, Hotel Rwanda is about Paul Rusesabagina, a hotel manager who lived happily with his Tutsi wife and three children.

However, when Hutu military forces started an ethnic cleansing operation against the Tutsi minority, Paul is forced to accept refugees into the hotel he manages.

As the United Nations withdraws, Paul must fight alone to save the lives of numerous vulnerable migrants caught in a violent civil war.

With the highest ratings on this list, 81/100 on IMDB and 91% on Rotten Tomatoes, this s indicates that this film is unquestionably a masterpiece and a must see if you haven’t.

Shot in Sierra Leone, this movie is a painful trip into the experiences of powerless Africans who stand in the path of its region’s richness and selfish companies.

The movie is based on real-life events about illegal diamond mining and selling during the civil war in Sierra Leone from 1991-2002.

In the movie, a man was taken away from his family and made to work in a mine where he finds a very valuable diamond. This discovery completely changes the man’s life because he quickly learns that people will do anything to obtain the diamond.

It almost goes without saying that a film with such a compelling story would receive high marks from critics, however, the Rotten Tomatoes score is just 63% while the IMDB rating is 8/10.

This captivating movie does a superb job of escalating one’s sense of anxiety.

This is another movie based on a true life story where Richard Philips (played by Tom Hanks) finds himself acting as a middleman when his ship was capture by Somali pirates on their way to Kenya.

In the movie, Tom Hanks seeks to safeguard his crew from the hostile invaders and their commander, Muse (Barkhad Abdi). Phillips must use his skills to ensure that everyone survives and gets home safely.

In the movie, he does everything possible to persuade the pirates to spare the crew’s lives. This movie has the highest Rotten Tomatoes score on this list at 93%, while its IMDB rating is 7.8/10.

Queen of Katwe is a very lovely story about a little girl from a poor family who uses her chess prowess to escape poverty.

Living in the Katwe slum of Kampala, Uganda, is a continual challenge for Phiona (Madina Nalwanga), 10, and her family.

When she meets Robert Katende (David Oyelowo), a missionary who teaches children how to play chess, her world takes a new turn.

Phiona becomes engrossed in the game and quickly rises to prominence under Katende’s help and guidance. Her success in local competitions and tournaments opens the door to a bright future and a good opportunity to say goodbye to poverty.

Probably everyone’s favorite, this movie is about a warrior prince who receives superpowers from the Egyptian Panther God Bast.

It is set in the fictitious African kingdom of Wakanda, which is gifted with the only vibranium reserve on Earth.

Its main selling point is the depiction of African-themed cultures, making it not just one of the greatest earning films of all time.

This is why it is one of the best Hollywood movies inspired by African culture. After its release, the film started a tremendous movement and left many wishing they were African.

This movie has a 96% rating on Rotten Tomatoes and a 7.3/10 rating on IMDB. It might also interest you to know that the sequel of this movie is set to be released this month, November 2022.

The last Hollywood movies inspired by African culture on our list is The Woman King.

The Agojie warriors, an all-female military squad from the Dahomey tribe in West Africa, are portrayed in this film as battling for their people’s liberation, even though the film’s source material is a little debatable.

Along with increasing its box office performance, this film is also receiving generally good praise, with a 94% rating on Rotten Tomatoes and a 6.3/10 on IMDB.

The movie, which is a favorite among viewers, did a good job of showcasing the beauty of Africa’s persistence.