10 Most Peaceful Places to Live in Africa 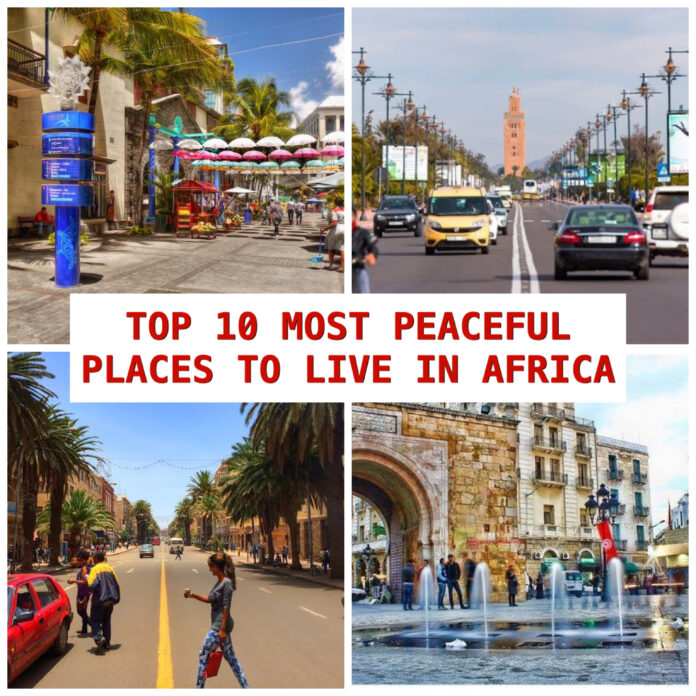 The continent of Africa is made up of numerous peaceful nations that would leave you wondering where exactly the most peaceful places to live in Africa are.

Not every location in Africa is unsafe, so here are the top 10 most peaceful places to live in Africa.

Although Windhoek is a small town in Namibia, it has developed into the nation’s social, cultural, political, and economic hub.

This little community has top-notch medical facilities and educational facilities. If you enjoy chic retail centers, a network of fun bars, a variety of excellent restaurants, and a dynamic business environment, Windhoek is definitely a place to call home.

While competing with some of the larger cities in terms of amenities, employment possibilities, and overall outstanding quality of life for its citizens, Windhoek offers a calm and safe place to live in a smaller setting.

The city of Gaborone boasts a booming economy and steadfast political stability. It is regarded as one of the safest and most peaceful places to live in Africa.

It is well-liked by people who are first-timers in Africa. Beef and diamonds are the city’s two main industries. Due to its recently built sports and recreation facilities, it is also experiencing an increase in tourists.

The city of Algiers is located in Algeria, North Africa.

Given its obvious French influence, it is often referred to as the Paris of North Africa.

This idea is supported by both the culture and the architecture. It provides a harmony between Arab and European influences. Thousands of expats are drawn to this friendly city because it is a tranquil and secure place to live.

Algiers’ economy is thriving because to the city’s many tourist attractions and gorgeous surroundings. You can choose between taking advantage of the activity and conveniences of the greater metropolis and the varied scenery of the neighborhood. There are sandy beaches where you may soak up the sun and enjoy the ocean.

South Africa’s center for literature and art is Grahamstown. Due to the numerous religious structures that represent its broad population of citizens of different religions, it has earned the moniker “City of Saints.”

The educational system is Grahamstown’s largest economic sector. The famed Rhodes University is located here, and Grahamstown places a high importance on education.

The National Arts Festival, an annual event that attracts visitors from all over the world, is only one of the many cultural events that the city hosts. One of the safest and most peaceful places to live in Africa right now is Grahamstown.

The main economic center of Eritrea is Asmara. It’s among the safest and most peaceful places to live in Africa and even the entire world. This is a sizable city that was founded as an Italian town during the colonial era.

With its stunning architecture, it’s one of Africa’s most sought-after locations to reside. Asmara has a large number of occupations, but the locals also take advantage of the amenities in the area during their leisure time.

One of the most tranquil cities in Africa is Casablanca. It is the biggest city in the nation and the major port city on the Atlantic.

It is a major financial hub in Africa and a centre for international trade. In Morocco, English is spoken in a few places together with French and Arabic.

Additionally, the company’s recreation area attracts visitors from all over the world. Casablanca boasts a thriving restaurant scene with several options for quiet, peaceful dining.

Casablanca can be a wonderful alternative for you if you’re seeking for a quiet community that provides all the conveniences of a larger city.

The capital of Morocco is Rabat. It is one of the country’s four imperial cities. At the mouth of the Wadi Bou Regreg, on the Atlantic coast, sits this stunning site.

Visitors come to this city to see its landmarks from all over the world. It has a long history of French colonialism and Islam.

It is the location of the Kasbah of the Udayas, a royal fort built during the Berber era.
The formal gardens, which were created by the French, have an ocean view and are regarded as some of the most stunning in the nation.

The famous Hassan Tower, which dates back to the 12th century, is also located there. Another of the mosque’s many tourist attractions, the minaret towers over the ruins.

The nation of Tunisia is headquartered in the city of Tunis. It is located along the northern coast of Africa. The largest city in the country is Tunis.

This settlement is situated on a hillside close to the Mediterranean Sea’s Lake of Tunis. It is the location of the historic medina that has been designated a World Heritage Site.

Agriculture continues to be the city’s main source of income, despite the bustling commercial and cultural activity in the city center.

In addition, the region has a large number of textile industries, with tourism serving as one of the main sources of income. Tunis has hot, dry summers, but its winters are typically mild and rainy. A peaceful nation and metropolis coexist here.

The capital of the Republic of Seychelles is Victoria. It is located on the northern coast of Mahe Island.

It is the largest island in the Seychelles group. It is a contemporary neighborhood with a Creole culture.

The National Botanical Gardens, the Victoria Clocktower, the Sir Selwyn Clarke Market, and many other attractions may be seen from the wonderful views of the ocean in the front, as well as the tropical rainforest with its deep forests, wild orchids, and palm trees.

Here, people lead relaxed, pleasant lives. The islands make money off of the massive tourism sector. It is a contemporary community that is home to a college for teacher education and a cutting-edge hospital for first-rate medical services.

Port Louis is a port city in the nation of Mauritius that borders the Indian Ocean.

Beautiful surroundings, including a coral reef, mountains, and the Indian Ocean, make for breathtaking views. With tourism as one of its key businesses, it is one of Africa’s major financial hubs.

With cold, dry winters from June through September and warm, muggy summers from November to April, this is a lovely and tranquil area to live. With lots of historical sights to view, it makes for an interesting area to live because to its French colonial architecture.