10 Most Popular African Plant based and Vegan Dishes 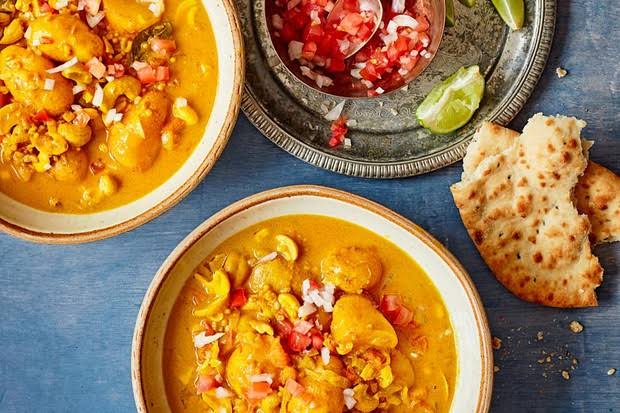 Fantastic flavor, brilliant color, and potent spices are abundant in most of the popular African plant based and vegan dishes. We’re not only referring to the Ethiopian injera and vegetable wat or the Moroccan tagine, which you’ve undoubtedly already had (and loved).

Traditional foods from this continent include millet and bulgur, as well as tropical fruits like bananas, coconuts, and jackfruit. There are also a ton of spices to truly wow your palate.

Additionally, these items are excellent for individuals who desire a filling vegan supper.
For far too long, the culinary options available in Africa have gone unnoticed.

Check these these 10 mouth watering popular African plant based and vegan dishes recipes.

Exotic foods and foreign recipes with flavor explosions in combinations you never thought were conceivable are really entertaining to try.

It’s time to try something different if you’ve been going to your favorite vegan Italian, Chinese, or Thai eateries a little bit too frequently.

Chakalaka is a hot South African vegetable relish that mostly contains tomatoes, beans, and onions, however some chefs also like to use carrots, bell peppers, chilis, and ginger.

Chakalaka was first created in Johannesburg, where it quickly became a favorite meal.
It is now a staple of the majority of South African barbecues, where it is served as a side dish to go with the meat.

When paired with other greens, some people enjoy serving it as a cold salad. Traditional pairings for this relish include breads like mealie pap or amasi, a type of thick sour milk.

White beans are the main ingredient in the classic Moroccan cuisine known as Loubia. This recipe is a household favorite in Morocco, where Moroccan bread is generally used to scoop up the beans that have been cooked in a zesty tomato-based sauce.

It is comfort food that goes well with fried fish and can be served as an appetizer, sprinkled with coriander or parsley, or as a side dish.

It is not unexpected that Loubia is a dish that is frequently prepared at home in Morocco because it is quick, easy, and delicious.

There is a lot more to Ethiopian cuisine than the well-known sour bread and creamy stews. With spices, vegan butter, and collard greens, this less well-known recipe is prepared. Meskel is a well-liked holiday where gomen kitfo is frequently consumed.

A soothing Moroccan meal called bessara is created with split peas or dried fava beans that have been puréed.

It can be made into a soup or a porridge, and the thicker varieties are frequently used as dips. The dish is frequently served with paprika and cumin on the side, and crusty Moroccan bread is almost required.

The puréed beans are typically seasoned with olive oil, lemon juice, and garlic. Bessara is typically served for breakfast and is particularly well-liked in the winter.

The national meal of Egypt, known as ful medames, dates back to the pre-Ottoman and pre-Islamic eras.

It is a typical morning dish made of gently cooked fava beans that have been seasoned with lemon juice, olive oil, garlic, and special spices.

The dish is incredibly well-liked during Ramadan because it is a breakfast item that is also beneficial for breaking the fast. Even though it is an Egyptian dish, it is made in the Middle East and North Africa as well.

The government regulates bean prices to keep them cheap for the country’s poorest residents because ful medames is a mainstay of the Egyptian diet.

Zaalouk can be eaten on its alone, but it’s also frequently served with crusty bread as a side dish, a spread for sandwiches, or a dip.

A traditional Nigerian cuisine called moi moi is made with ground beans or black-eyed peas, onions, oil, and freshly ground peppers such Scotch bonnet, bell pepper, and chili. Typically, the dish is offered with jollof rice, fried plantains, and akamu.

It can also be eaten as a snack all by itself. Due to its widespread appeal, moi moi is frequently served at parties and other special events.

Chapatis made in Kenya, commonly referred to as “soft-layered chapatis,” have a crispy exterior and a juicy interior. They pair well with stew, beans, and fried cabbage.

Falafel is regarded as one of Israel’s national meals, however it’s frequently hypothesized that it may have originated in Egypt, Lebanon, or Palestine despite the fact that they’re filled with protein.

In order to make a living, Yemenite immigrants to Israel began cooking and selling falafel on the streets in the 1950s. This historic cuisine eventually evolved into an early form of Israeli fast food.

Fava beans can be used as a replacement to chickpeas in the Israeli version, and parsley, coriander, cumin, and onions are frequently added as flavorings.

Today, falafel fritters are most frequently eaten in pita or lafa flatbread sandwiches, topped with fresh or pickled veggies, and covered in either hummus paste, tahini, or other Middle Eastern sauces.

There are numerous varieties of this spicily creamy rice dish throughout Africa. It always has flavor, though, which is a constant. Coconut oil and curry spices can be used to cook jollof rice for a distinctive, delicious flavor.

Share
Facebook
Twitter
Pinterest
WhatsApp
Previous article
A new ocean forms in Africa as the continent continues to split into two, geologists say
Next article
Singer, Akon To Open University in Africa, Set to Name it After Michael Jackson