A new ocean forms in Africa as the continent continues to split into two, geologists say 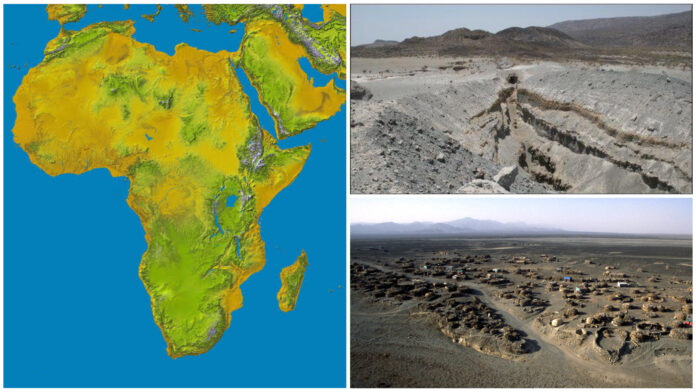 Africa is witnessing the birth of a new ocean, according to scientists at the Royal Society. Geologists studying Africa’s tectonic plates have discovered that the continent, which is home to 54 countries, is breaking up and its land mass is experiencing a shift from what it was once known to be.

Dubbed the East African Rift, the fault line stretches from the Afar region of northern Ethiopia to Mozambique, separating eastern coastal countries including Kenya and Tanzania from most of the continent.

The two pieces of land are separating at a rate of seven millimeters a year, according to a new study published in the journal Nature. This is how countries like Uganda and Zambia have their own coastline.

Scientists say that along the rift, several currently active volcanoes, such as Tanzania’s Ol Doinyo Lengai and Ethiopia’s Alu-DallaFilla, are shedding new light on the process. One Ethiopian volcano in particular, Erta Ale, has been in a perpetual state of eruption for over 50 years.

Also, read; Nigerian Entertainers Dressed To Impress At The Lagos Premiere Of “The Woman King”

Nestled between the two sides of the rift, the Victoria microplate, the largest of its kind on Earth, has been rotating counterclockwise for the past two years.

Compared to all other plates on the continent, including the African main plate, the Victoria microplate rotates in the opposite direction. This anomaly could accelerate the splitting of the rift, according to the scientists.

The researchers mark a Y-shaped intersection where the African, Somali and Arab tectonic plates meet between Djibouti and Eritrea as the place where the ocean begins to form.

Scientists say they are unsure of the fate of the two landmasses and whether or not a new ocean will form, but note that it will take tens of millions of years to discover.