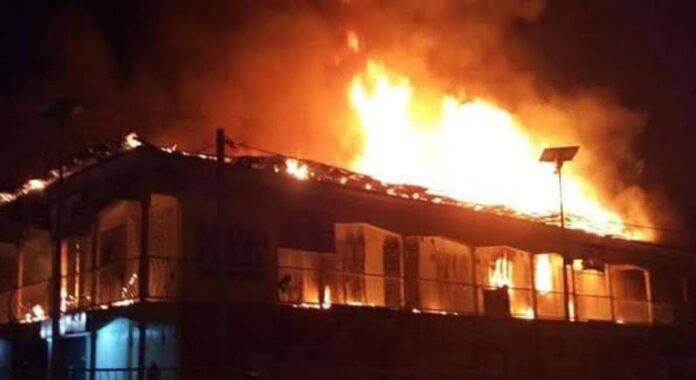 According to officials, 11 newborn babies died in a hospital fire in the Senegalese town of Tivaouane, prompting outrage and cries for accountability and quick action against anyone found culpable as regards a display of “irresponsibility.”

In response to the news, the Senegalese president, Macky Sall, released a statement saying that he “just learned with pain and consternation the death of 11 newborn babies in the fire that occurred in the neonatology department of the Mame Abdou Aziz Sy Dabakh hospital in Tivaouane.”

Without giving further details about the event, Macky Sall expressed his “deepest sympathy,” in a Tweet posted by the official presidential account on Thursday.

While speaking to the local media about the unfortunate deaths of these 11 innocent souls, Abdoulaye Diouf Sarr, Senegal’s health minister, revealed that a short circuit had triggered the fire, according to a preliminary investigation.

Although Sarr is currently not in Senegal, as he is away in Geneva for the World Health Assembly, he found reasonable information about the incident and reported on the radio that an investigation was being carried out into what he called a “very unfortunate and extremely painful” incident.

“Three kids were saved,” said Demba Diop Sy, mayor of Tivaouane, one of Senegal’s holy cities and a transportation hub 120 kilometers (74.56 miles) east of the capital, Dakar. He said that the police and fire departments were still on the scene, but gave no further details.

The catastrophe in Tivaouane follows several comparable events at public health institutions in Senegal, where there is a significant discrepancy in healthcare services between urban and rural areas.

In April of last year, a fire broke out at a hospital in the northern town of Linguere, killing four newborn babies. The cause was supposedly an electrical problem with an air conditioning unit in the maternity ward, according to the mayor of that town.

After the “atrocious” deaths of the four kids in Linguere, Amnesty International’s Senegal director, Seydi Gassama, stated his organization has asked for an investigation and enhancement of neonatology services in hospitals across Senegal.

With the fresh tragedy on Wednesday, Amnesty International “urges the government to establish an independent commission of investigation to assess culpability and prosecute the perpetrators, regardless of their position within the state machinery,” he wrote on Twitter.

Mamadou Lamine Diallo, an opposition lawmaker, expressed his outrage over the Tivaouane fire that murdered the babies.

“More babies burned in a public hospital … this is unacceptable @MackySall,” he said. “We suffer with the families to whom we offer our condolences. Enough is enough.”

Recall that the Senegalese authorities had earlier discovered that a kid who had been certified dead by a nurse’s assistant was still alive in a mortuary earlier this month. Unfortunately, the baby died soon afterward, furthering the intense cry for accountability within the country.

Several social media users have also referenced a pregnant woman who died last year in Louga, North of Senegal, after waiting for a cesarean section in vain. Although three midwives were sentenced to six months in prison with a six-month suspension for failing to assist a person in danger, more of such strict punishments are expected to further increase safety and reduce “irresponsibility” among workers in the country.