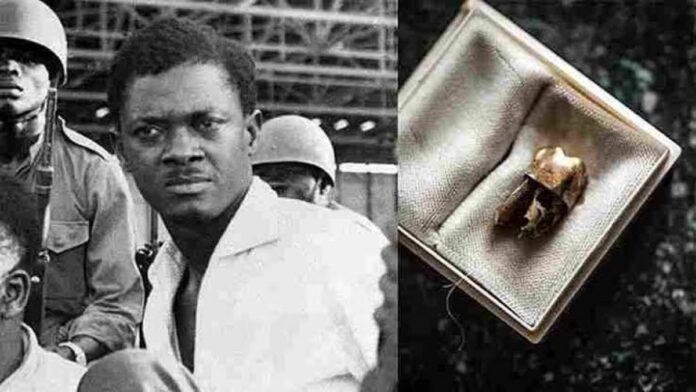 Belgium is set to return a “relic” of Patrice Lumumba back to the Democratic Republic of Congo, where it officially and historically belongs.

The official return is expected to take place at a ceremony in Brussels on June 20, where a relic of Lumumba, the first prime minister of the former Belgian colony who was slain in 1961, will be returned.

Since 2020, the Lumumba family’s demand for restitution from Belgian King Philippe has been approved in principle. The event has been postponed multiple times, most recently due to the coronavirus pandemic.

The goal is to restore Patrice Lumumba’s (1925-1961) remains to his homeland, in this case, a tooth retrieved by the Belgian legal system from the family of a police officer who was involved in the body’s removal over 60 years ago.

According to Belgian sociologist Ludo De Witte, author of a book on Lumumba’s assassination, this Belgian policeman, Gérard Soete, who is now deceased, had planned to bring back certain mementos such as “hunting trophies.” However, among these “mementos” was something special, one tooth said to have been connected to Lumumba. The tooth was eventually discovered by the federal prosecutor’s office.

Patrice Lumumba became the first Prime Minister of the former Belgian Congo (former Zaire, now the DRC) in June 1960, and was toppled in a coup d’état a few months later.

Separatists from the Katanga region executed him and two brothers-in-arms on January 17, 1961, with the help of mercenaries from the previous colonial state.

His body, which was dissolved in acid, has never been found, and the return of this “relic” should allow Kinshasa to eventually create a “monument” in his honor.

The Return of the Hero

A Congolese delegation is expected in Brussels on June 20 for the “return of Patrice Emery Lumumba’s remains,” as confirmed by Belgian Prime Minister Alexander De Croo’s office.

According to a recently published report, De Croo will offer a speech on behalf of the Belgian state, given the symbolic importance of the event for the DRC but also for Belgium and beyond.

According to the family’s wishes, the reparation will take place in a “small group” before the official ceremony. Following that, the Congolese diaspora in Brussels will be given a “minute of memory.”

Following King Philippe’s visit to the DRC, this restitution marks “a new turning point in the history of diplomatic ties between Belgium and the DRC,” according to the statement.

The Belgian sovereign will visit the former colony for the first time since his reign began in 2013, from June 7 to 13.

On the 60th anniversary of independence, King Philippe, in a historic first, expressed “his profound sorrow for the wounds” inflicted during the colonial period on June 30, 2020.

Recall that a Belgian judge had earlier ruled that the tooth removed from the body of Patrice Lumumba, the Congo’s first elected leader, should be returned to his family in 2020.

As reported by the Guardian, Eric Van Duyse, spokesman for the Belgian federal prosecutor’s office, said the tooth would be returned to the Democratic Republic of the Congo, a former Belgian colony.