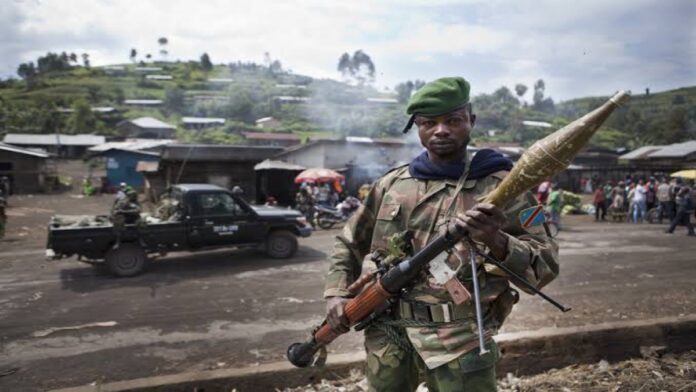 Rwanda has accused Congolese forces of launching a rocket strike on their (Rwanda and DRC) border, injuring numerous civilians.

It called for investigations to be carried out immediately on the subject, especially into the “rockets” that had been said to land in the Musanze district, which borders DR Congo.

According to reports by the Rwandan army, the attack injured numerous citizens and led to the destruction of several properties. The army mentioned that the firing happened on Monday morning and was ongoing for at least 21 minutes.

“The situation in the area is normal, and security is assured,” stated Colonel Ronald Rwivanga of the Rwandan army.

Kigali said it had requested an immediate probe from the expanded Joint Verification Mechanism (JVM), a regional agency that monitors and analyzes security incidents in the dangerous Great Lakes area.

The Rwandan authorities have also contacted their Congolese counterparts about the incident, said Colonel Rwivanga.

Sadly, the Congolese army is yet to respond to the Rwandan claims at the moment. While a reply hasn’t yet been received, the Rwandan military continues with its accusations.

However, the Rwandan forces have also been accused by certain Congolese authorities of assisting armed groups in the mineral-rich eastern Congo, where dozens of such organizations operate.

Rwanda has come out to deny these accusations, claiming that it is not assisting Congolese rebels.

Recall that General Sylvain Ekenge, spokesman for the military governor of North Kivu province, had earlier accused the Rwanda Defense Forces (RDF) of supporting the M23 (for “March 23 Movement”) rebel group, which he claimed had “carried out incursions and attacked FARDC (Congolese Armed Forces) positions in Tchanzu and Runyoni, in the Rutshuru territory.”

Patrick Muyaya, the Congolese Minister of Communication and government spokesman, said on French television channel TV5 Monde that “it is time to put an end to this form of hypocrisy or complicity between the M23 and the government of Rwanda,” because “we want to look at Rwanda as a partner country, just as we look at Uganda.”

Media outlets have pointed out the fact that Tshisekedi meets with his Rwandan counterpart, Paul Kagame, multiple times. However, the M23’s increasing activity has reignited suspicion.

Also, worth noting is what has often been tagged as the source of the tension between the Democratic Republic of Congo and Rwanda.

According to the Eastern Congo initiative, “After the 1994 Rwandan genocide in which 800,000 Tutsis and moderate Hutus were killed, millions of Rwandan refugees flooded into the eastern Democratic Republic of Congo.”

However, In 1996, Rwanda and Uganda invaded eastern DRC in an attempt to apprehend the remaining perpetrators of the genocide.

This is believed by some to be the beginning of the intense political issues that often raise their ugly head between these two nations.