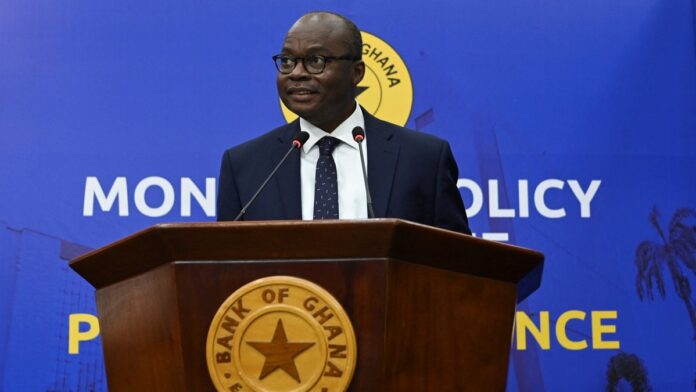 According to Ernest Addison, Governor of the Central Bank of Ghana, Ghana’s central bank hiked its primary interest rate by 200 basis points to 19 percent on Monday to contain inflationary pressures and support macroeconomic stability.

The decision by the Ghanaian financial institution is due to increases seen in the previous months when experts assumed that the BoG would raise the policy rate.

Interestingly, the Bank of Ghana earlier hiked its policy rate by 250 basis points to 17% in March, the greatest increase in the country’s history.

As a result, according to Reuters, the consumer inflation rate in the gold, oil, and cocoa producers touched an 18-year high of 23.6 percent in April.

“The committee felt it was necessary to take decisive action to address present inflationary pressures in order to re-anchor expectations and promote macroeconomic stability,” Addison said at a press conference in Accra.

The rapid depreciation of Ghana’s CEDI has eased, according to business analysts, but the currency has nevertheless lost roughly a quarter of its value since the year began.

According to Reuters, capital outflows have completely negated a $1.3 billion trade surplus generated by a 61 percent increase in crude oil export revenues in the first quarter.

According to Addison, this resulted in a $934.5 million overall balance of payments deficit in the first quarter, compared to $429.9 million in the same period last year.

Recall that the West African nation has been experiencing economic troubles for quite some time. As evident in the address of the Ghanaian Minister of Finance, Ken Ofori-Atta back in March, several measures were reportedly established.

The minister outlined the government’s efforts to tackle economic problems brought on by recent global and domestic developments, emphasizing that significant policy measures like the free SHS will not be reversed.

“Let me state unequivocally that President Nana Addo Dankwa Akufo-Addo has no intention of reversing a significant policy like free SHS. We consider education as the best enabler for long-term economic growth and transformation, and we will do more to improve it so that it can better serve our children,” he stated.

In terms of the economic issues facing the Ghanaian government, the minister referenced the minority in parliament’s adamant opposition to the E-levy, which could jeopardize investor confidence in Ghana’s ability to implement its programs and settle debts, resulting in a downgrade of credit rating agencies and leaving the CEDI vulnerable due to a lack of access to the international capital market.

However, issues remain on the international front for the West African nation. After the destruction caused by the coronavirus pandemic, Russia launched a war on Ukraine, disrupting supply chains, raising inflation, and creating uncertainty in financial markets.

The minister detailed measures to combat the negative impact of the country’s domestic and foreign issues, including certain spending cuts, to address the challenges.

After Parliament failed to approve crucial revenue streams at the proper time, the government announced and immediately began implementing a 20% spending cut as part of fiscal stabilization and debt sustainability measures, he revealed.