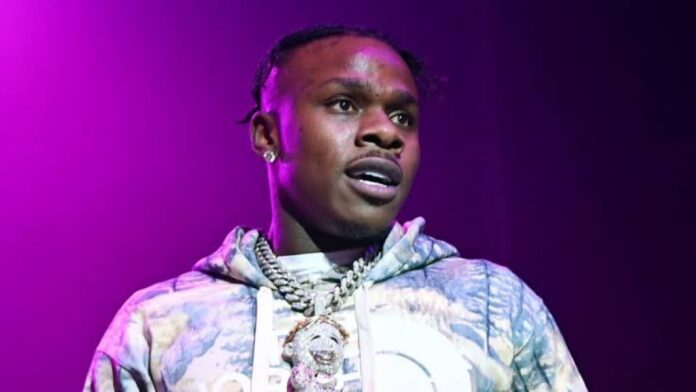 A video of famous American rapper, Dababy, being curved while trying to kiss a Nigerian fan has been making the rounds on social media.

Recall that the rapper had made his presence known in Nigeria when he posted several videos of himself on social media, enjoying Lagos. However, one of the videos which trended just as much as the news of his presence was that of the North Carolina rapper getting “a little too comfortable with a female fan.”

On Tuesday (May 17), footage of DaBaby hanging out in his car among a swarm of fans trying to obtain a photo of him leaked online. The rapper was seen making the peace sign in the video, and while posing, he noticed a female fan in the crowd who caught his attention.

As seen in the video, the rapper simply moved close to the lady in question and attempted to kiss her. Unfortunately, she moved out of the way just as he tried to make contact.

Recall that another video also surfaced online last month where the rapper was spotted trying to lock lips with a fan in what seemed like a “musical venue.” This video didn’t also sit right with fans, who immediately began to use colorful words to describe Dababy as being “curved.”

To fight back against the trolls, the 30-year-old took to Instagram and uploaded a video from that night that he believed was another side to what was being portrayed online.

In the new video, DaBaby and a fan hug in his video, and the rapper then attempts to kiss her buddy. Dababy said that he was indeed good friends with the lady, who he claimed refused the kiss because he had already blown her a kiss earlier.

The rapper reacted to the video posted by The Shade Room with the caption, “Who be making this [cap] ass shit up bruh?”

“Y’all go head on man,” DaBaby wrote in the next slide above his own video. “Me & my booboos love each other to death but ain’t no kissing going on.”

Dababy’s presence in Nigeria was for a music video with Afrobeat superstar, Davido. Davido has since shared several videos of himself and Dababy, saying something special is to be expected from them soon.

Watch video of Dababy being curved below: