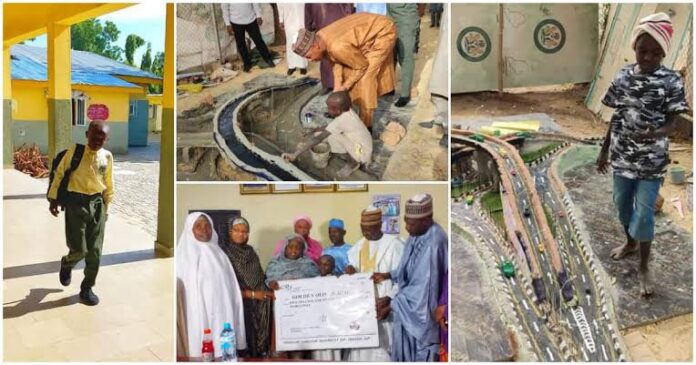 After designing one of the most fascinating overhead bridges with materials he sourced locally, a 13-year-old Nigerian boy wonder has attracted the attention of people on the Internet and a scholarship worth 5 million naira.

The 13-year-old boy, Musa Sani Kano, caught the attention of the Borno State Governor of Nigeria, Professor Babagana Zulum, who rewarded his brilliance with a scholarship worth 5 million Naira.

To recognize the young boy’s talent, Zulum ordered the State Education Trust Fund (ETF) to be awarded to the 13-year-old.

A check for N5 million (12,036) was also presented to a private school as a scholarship to finance his education, from elementary school to high school.

A post on the governor’s official website explained that ETF chairman Professor Hauwa Bui handed over the N5m check to Golden Olive Academy, a private school in Maiduguvi where the bright boy is expected to continue his education.

After delivering the check to the private school, he encouraged Musa to focus and study harder to achieve his dreams. He also thanked the governor for the kind gesture and the initiative.

Recall that the boy’s creative skill has earned him several other opportunities and financial aid. Earlier, he reportedly received a US scholarship from a company, his mother received 1 million Naira ($2,408) in donations, while his father also got a well-paying job.