15 Popular African Attires You Should Know About 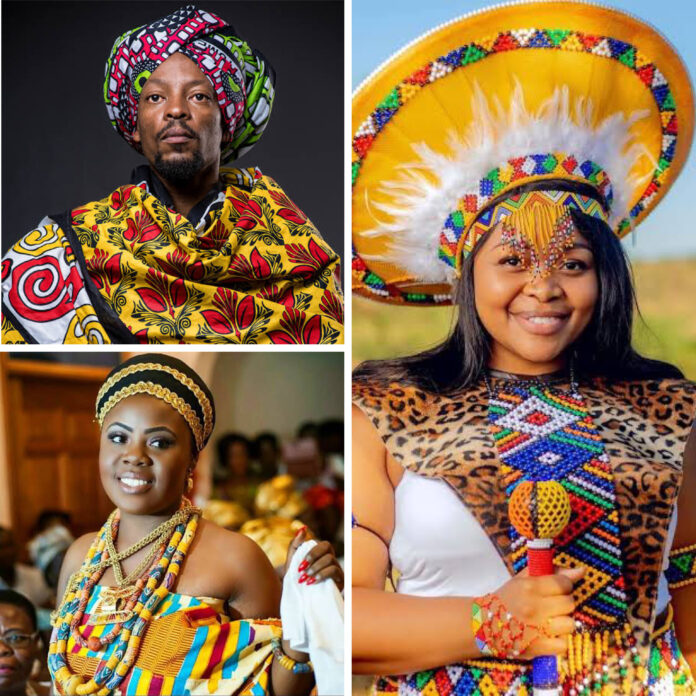 One of the most prominent representations of Africa’s diverse and rich cultural heritage is her traditional clothing.

The identity or culture of a particular ethnic community in a particular geographic area is generally expressed through their traditional ethnic attire.

Different ethnic groups on the continent have distinctive popular African attires they are known for.

The clothing worn in Africa is more than just pieces of fabric sewed together to conceal one’s nakedness, the clothing also serves as a symbol of identity and culture.

This is why you can easily identify one’s origin in Africa through their attire. For instance, Agbada, kente, and dashiki are among the most popular traditional outfits in West Africa and are worn by both men and women in the region.

Beyond just being beautiful, wearing one of these traditional African garments can make you feel more connected to your heritage.

The most common African outfit seems to be the dashiki. Despite being worn primarily in West Africa, it has spread to other parts of the continent. People in East Africa prefer to refer to it as Kitenge, especially in Kenya and Tanzania.

The most common traditional cloth changes to Djellaba as you go northward across Africa. Both men and women typically wear this silk robe over other clothing. Muslims are primarily known for wearing this kind of clothing.

With that being said, here are 15 Popular African attires from different parts of Africa.

The Habesha ladies of Addis Ababa, Ethiopia, wear the traditional African dress known as the Habesha Kemis. Habesha Kemis is typically a long robe that covers the entire body from the neck to the ankles.

This is one of the most popular African attires from Ethiopia and Eritrea and it is normally worn by women on special occasions.

It is made from cotton cloth and comes either with a short or long sleeve in color grey, beige or white.

The Ashanti and Ewe people of Ghana are the pioneers of the unisex kente, a traditional African attire.

This popular traditional African attire is made from silk or cotton fabric strips cut to fit the patterns of the cloth.

Despite modernization, native Ashanti still weaves traditional Kente with their hands. Even though this attire originates from Ghana, today, this print has gained an enormous presence in different parts of the world.

This is why it is also recognized as one of the most popular African attires.

Shuka is a type of traditional African garment worn by the Maasai of Tanzania and Kenya. It usually has red and black stripes and is known as the “African Blanket.”

Originally, Shuka was only worn by Maasai. However, this indigenous African fabric is currently gaining popularity everywhere in the world and is becoming more popular as urban wear.

Hence it ranks third on our list of popular African attires.

In the Great Lakes region of Africa, most men wear kanzus, which are white or cream traditional clothes.

Ethiopians, Kenyans, Malawians, Rwandans, Tanzanians, and Ugandans are among those who fall under this category.

Arabs refer to it as Thawb, whereas the English call it Tunic. Men wear it to weddings and festivals in Uganda, where it is extremely well-liked. The Kanzu is a piece of clothing worn by “men of culture” to project a sense of power and refinement.

The kanzu is worn as the national costume of both Tanzania and the Comoros, where it is known as the “Kandu.” Additionally, the robe is worn in a few Muslim coastal areas of Kenya.

On the other hand, it is the most important outfit in the eyes of Ugandan men.

In East, West, and Central Africa, kitenge, sometimes known as chitenge, is a fabric that resembles a sarong.

Women commonly use it wrapped around the chest or waist, as a headscarf over the top, or as a baby sling.

Kitenges are brightly colored fabrics with a variety of patterns and styles. Kitenges are frequently inscribed with Swahili proverbs in Tanzania and the Kenyan coastal region.

This popular traditional African attire is worn in several African nations, such as Kenya, Uganda, Tanzania, Sudan, Nigeria, Cameroon, Ghana, Senegal, Liberia, Rwanda, and the Democratic Republic of the Congo.

Chitenje is the name of kitenge in Malawi while in Namibia and some regions in Zambia, it is known as chitenge.

Prior to a recent development that encourages civil servants to dress in a kitenge on Fridays, men in some nations, such as Malawi, never wore kitenges.

The material was formerly only known for use in the creation of women’s gowns, but it has since undergone transformations and is now used to produce bags, shoes, caps, earrings, and lots more.

Dashiki is a unisex traditional African attire that is worn by the Ewe people of Ghana.

This African attire normally comes in different colors and patterns but it is well distinguished for its V-shaped collar.

Africans and Blacks in the diaspora now wear them, despite the fact that they were formerly only worn in Ghana and a few other West African countries.

Dashikis are fashionable and eye-catching. This is why it is one of the most popular traditional African attires to ever exist.

In the region of Africa’s Great Lakes, men and occasionally women wear the kanga, a vibrant fabric that is lighter than kitenge.

It is a rectangular piece of printed cotton fabric that is 1.5 meters by 1 meter in size and frequently has a middle section (mji) that has a different pattern from the borders and a border-like border along all four sides (called pindo in Swahili).

They are offered in sets of two that can be combined into a single outfit by cutting and hemming them.

Traditionally, the Isiagu was given to a man when he received a chieftaincy title and this attire is usually worn with a red cap or the Igbo leopard cap.

In the olden days, it was an abomination for a woman to wear isiagu. Thanks to the millennial generation that has changed this narrative.

Aso Oke is a traditional style for women among the Yoruba people of Nigeria and Benin.

A typical Aso Oke dress often consists of four pieces: a shirt called a “buba,” a wrapped skirt called “iro,” a headband called a “gele,” and a shoulder sash called a “iborun” or “ipele.”

From the picture, we are sure that you’ve most likely come across this attire on the internet. It is no surprise that Aso Oke is indeed one of the most loved among all popular African attires.

Also from Nigeria, Agbada is a flowing robe with a long sleeve that is commonly worn by men.

The Agbada is typically embellished with beautiful embroidery and worn on important religious or ceremonial occasions, including festivals, religious events, weddings, funerals, and Friday prayers in the mosque.

Many nations in West Africa now wear it as their traditional clothing.

Gomesi, also known as a busuuti, is a vibrant floor-length dress with short, puffed sleeves and two buttons on the left side of the throat.

A sash is used to tie the garment, and it is draped from the hips to below the waist. Silk is the most expensive fabric used to make gomesi, which is typically composed of cotton, linen, or both.

Djellaba is most popular in the Maghreb region of North Africa.

It is a unisex attire with a loose-fitting outer robe and full sleeves. Djellabas are traditionally made of wool and come in a variety of shapes and colors.

The color of a djellaba among the Berbers historically denotes the wearer’s marital status.
Both male and female djellabas come with a sizable hood known as a “qob.”

The hood shields the wearer from the hot sun, chilly winds and blowing sands when necessary.

The Boubou is a traditional and fashionable Senegalese robe that is worn by both men and women throughout Africa.

It is typically wide and comes in a variety of lengths, depending on the wearer’s desire and height, and is made from a single piece of fabric.

There is also the great Boubou, which is more exquisite and uses about 300 cm-long textiles that reaches the ankles.

The list of the popular African attires will indeed be incomplete without talking about bou bou.

Feathers and animal skins make up the traditional Zulu attire for men.

The tufts of a cow’s tail (amashoba) are worn on the upper arms and below the knee to make the person appear broader than he is.

The term “ibheshu” refers to the apron that men wear to conceal their buttocks. It is soft and simple to work with because it is made of calf leather.

A married Zulu woman will typically wear a Zulu hat, known as an Ichikolo in the traditional Zulu language, during weddings, birthday celebrations, and other cultural and religious occasions.

The Ichikolo is made of woven grass, coated in polyester fabric, and embroidered with threads made of cotton and wool.

The last on the list of popular African attires is Toghu otherwise known as Atoghu.

The Bamileke people of North-Western Cameroon are known for wearing the Toghu or Atoghu, a traditional dress.

The Toghu was formerly solely worn by monarchs as a symbol of their superiority to commoners. It is also a customary outfit for festivals, formal coronations, and other occasions.

Toghu is a vibrant design with embroidered layout and is made of a silky black material. Toghu has expanded internationally since the start of the twenty-first century as more African Americans continue to trace their ancestry to Cameroon.