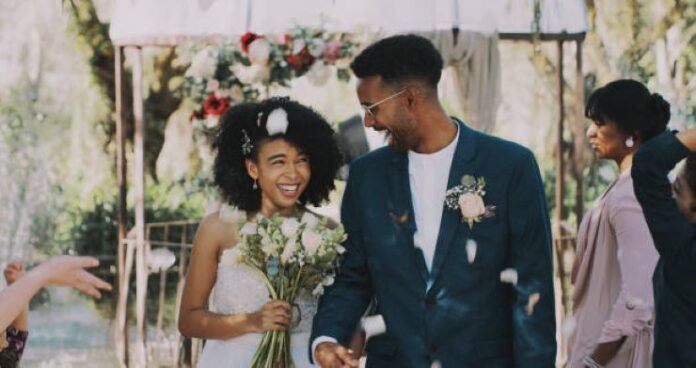 Africa has a diverse range of customs and cultures. Africans, in particular, have a tendency to go all out to make their weddings unforgettable.

African wedding customs take many different forms, ranging from dancing camels in Niger to dance-offs in South Africa and henna festivities in Kenya and Tanzania.

The examples that follow showcase the continent’s enormous diversity. Read on if you’re interested in learning about the history of other people or if you just want to include some African traditions in your wedding!

We’ve included a few of African wedding rituals and customs that you might find fascinating.

Around the world, asking for a girl’s hand in marriage is a popular ritual. Without this phase, many African wedding ceremonies cannot continue.

Knocking on the door, or “kokoo ko,” is the name of this ritual for some ethnic groups in Ghana. On a specific, scheduled night, the bride’s home is “knocked on” by the groom and his family.

When they are allowed inside, they give the bride’s family gifts like wine, cash, and kola nuts. They then declare their intentions and talk about the possibility of getting married and combining the two families.

If all goes as planned, the bride enters to officially decide whether or not she wishes to wed the man. As soon as she gives her assent, marriage preparations are underway.

Different African cultures perform the knocking ceremony in distinctive ways. The Yoruba in Nigeria refer to it as “Mo mi I moe” (know me and let me know you). “Kumenya Mucii” is how the Agikuyu community in Kenya refers to it (getting to know the home).

According to African traditions, marriage is a union of two families, not just two people. It is crucial to have an engagement ceremony, which is frequently also a dowry (bride price) payment ceremony.

These celebrations bring the entire family together and provide each side a chance to get to know one another.

Bride price is still an important feature of many African wedding customs and is still frequently observed. Bride money used to be a guarantee of premarital female virginity and sexual faithfulness.

The groom may also show that he was a good provider and would take good care of the bride by doing this.

Every country has a slightly different ceremony. The Moaga tribe in Burkina Faso refers to it as Poug PousSôm, or PPS.

On this day, the bride’s family receives the “negotiated” bride price from the groom’s family. This can take the form of cash, animals, food, kitchenware, or clothing.

Consumer items like kola nuts and dolo (millet beer), as well as services like field work and hut maintenance, are widely available.

The bride’s sisters and girlfriends humorously hide several items from the groom’s family during the wedding, like shoes. To return the products, they then demand payment.

This is done to demonstrate to the groom and his family that they are unable to “snatch” their sister or friend from the family so easily. Cohabitation is socially acceptable after the PPS, but there will typically still be a religious or civil wedding.

Every African group celebrates the engagement ceremony in a unique way. While the Zulus in South Africa refer to it as “Lobola,” the Agikuyu group in Kenya calls it “Ruracio.”

Related article: Here is a selection of five Stunning Wedding Dress Style inspiration From Across Africa

3. Cooking for the in-laws

In Burkina Faso, the Mossi (or Moagha) bride is expected to prepare the national cuisine for her in-laws on the seventh day following the wedding.

The delicacy in question is tô, a delightful maize paste. It typically comes with a soup and a sauce (okra sauce is a favorite).

A sheep is slain while this is happening at the bride’s father’s residence. Soup is made with its meat. After that, the bride’s family sent several ambassadors to the in-laws.

The remaining of the newlywed’s household items are brought over by that delegation, along with the soup, which is enjoyed with the in-laws.

The bride’s family departs after dinner to go home. The bones from the meat they recently ate are likewise packed up.

They bury the bones along the path as is custom. To keep the newlyweds from experiencing bad luck, none of the bones can return to the bride’s father’s home.

One of the most well-known wedding customs in the black community in the US is jumping the broom.

The bride and groom actually jump over a broom together, as the expression implies. This action represents the start of a new life and the beginning of a new family.

In a symbolic gesture, they are “sweeping away” their previous single lives and worries.
It’s unclear how long this custom has existed.

Some people date it to the 18th-century Welsh-Romani gypsy settlements. Some people think Ghana may have been the place of origin.

In any case, during the 1840s and 1850s, slaves in the Southern United States engaged in this practice. In fact, they were unable to legally get married at the time.

This led to numerous couples organizing private ceremonies in which they would jump the broom to declare their undying love for one another. As a result, the expression “jumping the broom” came to mean “getting married.”

Note: If you intend to include this tradition in your wedding, make sure your dress is designed such that you may jump the broom with ease.

Kola nuts are a significant component of numerous wedding traditions in West Africa. The large tree on which the caffeine-rich nut grows in West African tropical woodlands.

In The Gambia, a guy will initially send a kola nut as a greeting and a declaration of his proposal to a woman he wants to marry.

If approved, the girl’s family meets with representatives of the man’s family. A date for the “breaking of the kola nut” is set after they decide on the dowry (marriage).

The breaking of the kola nut marks the conclusion of the traditional wedding ceremony. After that, family members and elders share it.

Nigeria, Ghana, Sierra Leone, and Liberia are other African nations where kola nuts are a part of wedding customs.

Several African societies stress subordination to one’s husband, just like in the Christian faith. As a result, it’s typical in many African nations to observe a bride bowing before her spouse during an engagement or wedding ceremony.

Brides from the Mossi (or Moagha) ethnic group in Burkina Faso get a drink from their younger cousins during the customary engagement ritual.

Prior to presenting the drink to her husband on her knees, the bride is expected to taste it first.

In Yoruba customs, the bride will also often bend down to place a cap on her husband’s head. In most cases, the spouse returns the favor by dousing her in cash and hoisting her into the air.

Prior to the wedding, an American or European bride might get a spa treatment. An African bride also enjoys a day of pampering, but with a slight variation.

Several days prior to the wedding ceremony, brides and their female guests participate in “henna ceremonies/parties” in various communities throughout East, West, and Northern Africa.

The duration of this celebration among the Swahilis in Kenya and Tanzania might range from two days to a week.

The bride may be bathed, have perfume applied to her, have her hair styled, and have henna applied on her body.

Female friends and family members can participate in this ritual by getting henna painted on their arms, legs, and feet, among other body areas.

Around the world, it is quite typical for the bridesmaids to wear matching outfits. African sisterhoods, cousins, and close friends are also matched at African engagement and wedding ceremonies, raising the bar even higher.

During formal occasions, it’s a method for friends to express their closeness to the family. It may be constructed from cotton, polyester, or other materials.

Despite the identical cloth, ladies typically create their different styles. Both the mother of the bride and mother of the groom have the option of selecting their own attire for wearing with their immediate family, relatives, and friends.

Sanga Willi is another name for this behavior in the Dioula language, which is spoken in Burkina Faso, Mali, and Côte d’Ivoire.

9. Tasting of The Four Elements

The tasting of the four components is a wedding custom practiced by the Yoruba ethnic group, which is represented in nations including Nigeria, Niger, and Benin.

The distinct phases of a marriage are symbolically tasted by the bride and groom at that ceremony.

The relationship will experience disappointments, which is symbolized by a lemon slice. To combat the harshness they must endure during arguments and difficult moments, take a drink of vinegar.

Cayenne is a spicy element that symbolizes a means to infuse the relationship with passion and spice. Lastly, a tablespoon of honey to symbolize the happiness of marriage.

The couple symbolically conveys that they will be able to overcome anything by tasting each of these delicacies.

In fact, Christianity predominates in some areas of Ethiopia. More specifically, a portion of Ethiopians identify as members of the Ethiopian Orthodox Tewahedo Church.

The Crowning of the couple is the focal point of an Ethiopian Orthodox Tewahedo Church wedding ritual.

Semi-precious stones, metals, and threads of gold and red are used to create the ceremonial crowns.

As a representation of their new status as the King and Queen of their new households, they are placed on top of the heads of this African bride and groom. In the name of the Trinity, the priest blesses the crowns.