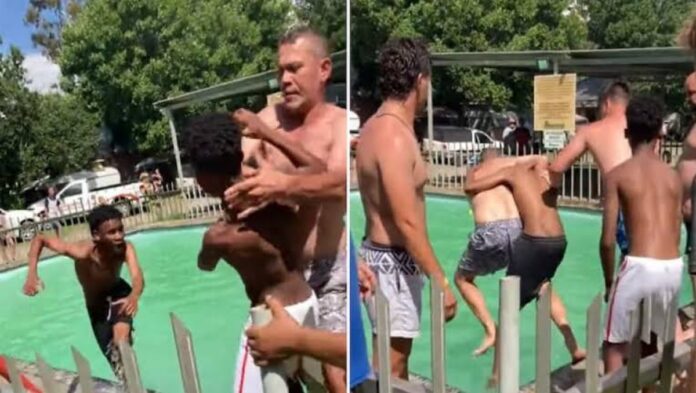 Three white men in South Africa have been charged with crimes, including attempted murder, after an alleged racist attack on two black boys sparked public outrage.

The men were caught on video attacking two black teenagers who were using a swimming pool at the Maselspoort Resort in Free State County.

The men tried to stop the teenagers from swimming, claiming the pool was for whites.

In the video, widely shared on South African social media, the men yelled at the boys and beat them. One of the men pushed one of the boys under the water.

Additional security video footage shows the men trying to stop the teens from entering the pool and the group of white men who were swimming at the time exiting the pool just as the black teens enter.

Police said Johan Niel, 33, and Jan Stefanus van der Westhuizen, 47, had been released on bail and were likely to appear in court again next year.

“The two appeared in court on charges of criminal assault and damage and the matter has been adjourned until January 25, 2023, while they are being released under caution,” said Police Commissioner Baile Motsweenian.

The third suspect is expected to appear in court on Thursday, as various political parties and activities protest outside the courthouse.

The incident was widely condemned, including by President Cyril Ramaphosa.

“As black and white South Africans, we must unite in condemning all manifestations of racism and attempts to explain or defend these crimes. Racism is not an issue that only black South Africans struggle with,” Ramaphosa said in a statement.

Members of the left-wing Economic Freedom Fighters party visited the resort and demanded answers from the manager, who claimed that the resort had no apartheid policies.